Exploring Caves Worth Their Salt 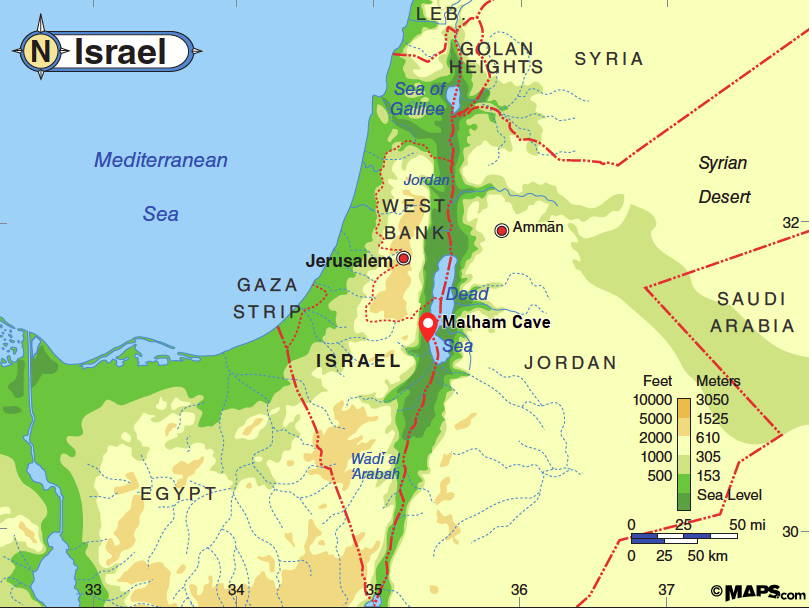 A while back, the Geo-Joint went to Hranica Propast, the Czech Republic’s new world-record holder as the deepest cavern. Its deepest-yet-found 1,325-foot depth promised to extend even deeper because a camera-equipped robot could see farther into the abyss, but ran out of cable. That cave was cut into limestone, not only by rainwater, but by hot springs bubbling up from below. Who knows how deep those springs go? There are many long limestone caves of the more horizontal variety in the world, with Kentucky’s Mammoth Cave as the granddaddy of them all. Being 405 miles long, it’s far and away the record holder. Recently, however, a much shorter cave took an award for the longest of its kind—a salt cave. Though rare, salt caves occur naturally, and also by way of human excavation. Salt mining has produced miles of solid-salt corridors, and in recent years the popularity of hanging out in such places, or even in salt block-lined rooms, has grown as people are convinced of the purifying and anti-bacterial qualities of being surrounded by NaCl. Whether doing your yoga in a saline cell enhances one’s health, or is just another New Age fad, a lot of money is being made from the claim. 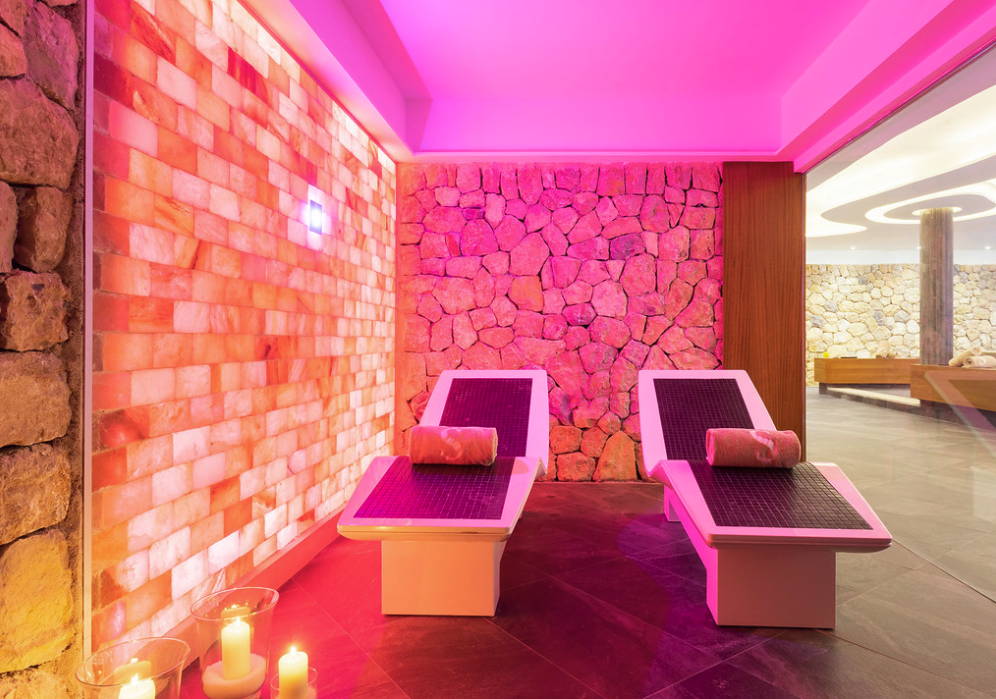 Salt block-lined rooms have become popular places to relax and get in touch with your personal energy flow. 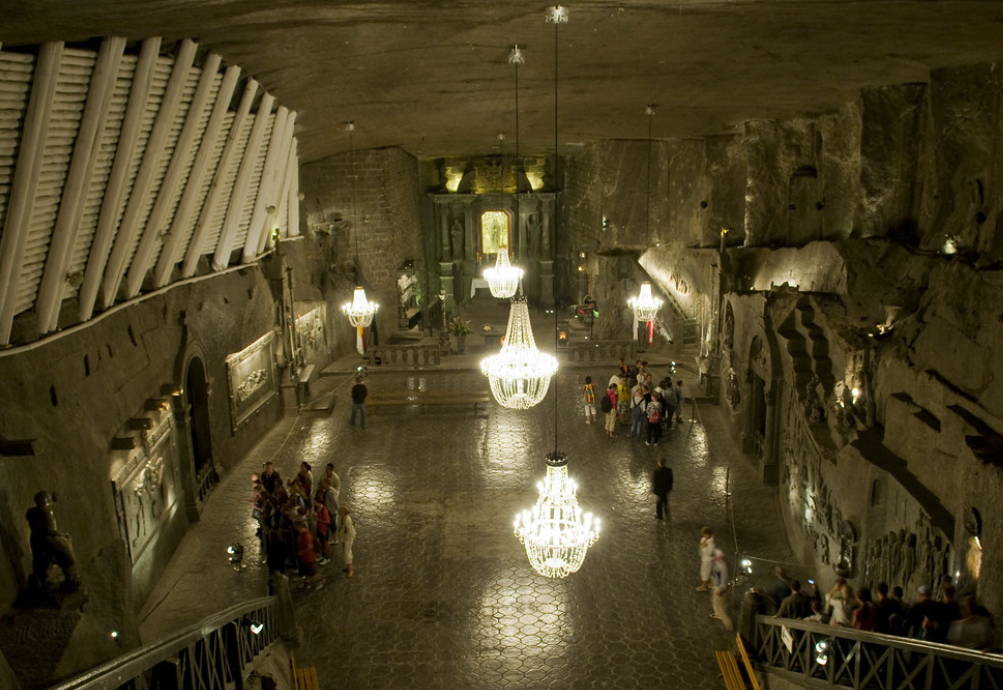 In Poland, they made a grand hall, amusement park, art gallery, and more, out of the old Wieliczka Salt Mine.

The cave that has newly found itself a star for its length is the real deal. It is a natural cave, in a place already famous for its harsh and unique environment. Malham Cave is located along the southwestern shore of the Dead Sea, in Israel. This deep basin—with the lowest surface elevation in the world— has been collecting salt from the evaporation of ancient seas for eons. The salt beds there are thick under Mount Sedom, which was pushed up as deep salt layers were forced upward by tectonic forces. Other than a layer of caprock, the mountain is basically made of salt. Malham Cave is within Mount Sedom, meandering underground through more than six miles of corridors and chambers. It doesn’t go that far in one straight line, but branches out in multiple directions for its mileage total. Of the hundred or so chambers, one is over 3.5 miles long. Few other salt caves combine their passages for more than a half mile altogether. The former record-holder, Namakdan Cave on Qeshm Island in Iran, is just over 4 miles long, so Malham’s new record margin is substantial. 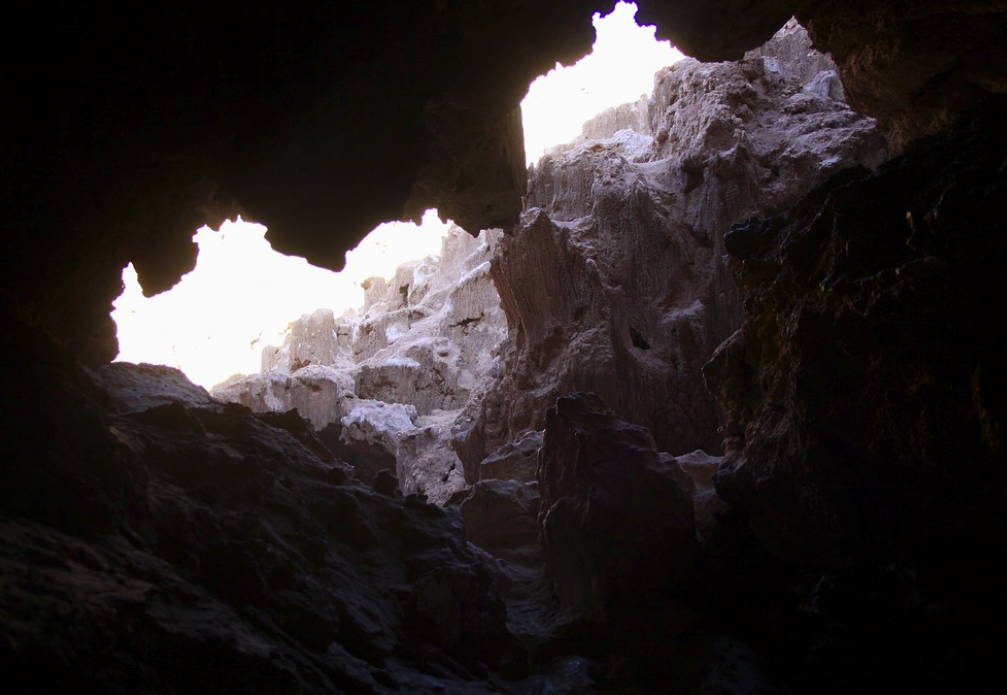 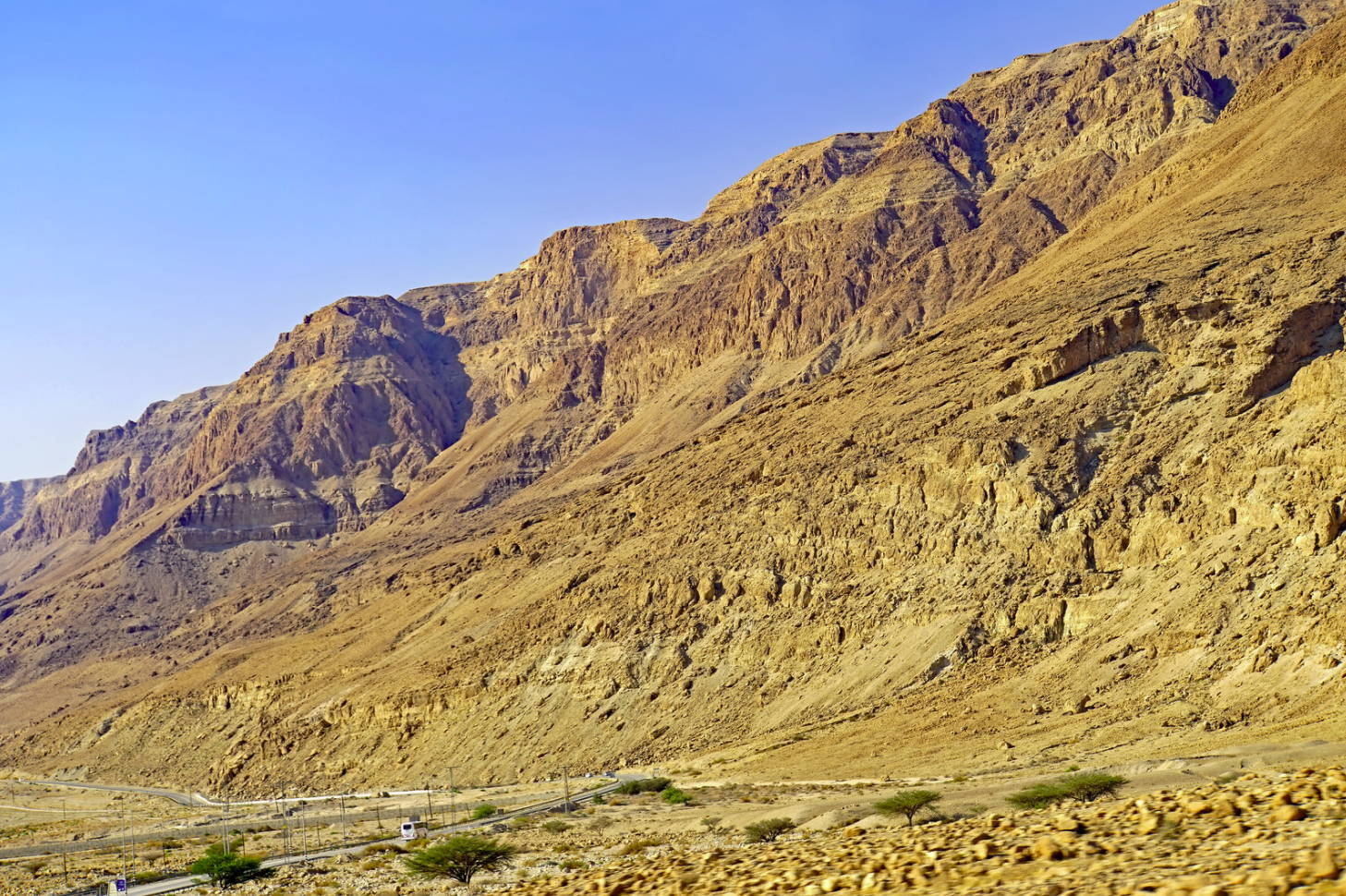 The rugged landscape in the Dead Sea area holds a variety of caves, including salty ones like Malham Cave.

Being carved out of salt, Malham Cave was much more easily created than caves worn into limestone. While salt dissolves more readily than rock, the arid environment of the Dead Sea region means only a scant two inches of rain is available in an average year, usually arriving in just a few heavy bursts. That’s not much time to wear away the salt beds to form and slowly increase the size of a cave. Still, by means of radiocarbon dating of organic material found within, the cave’s age has been dated at a mere 7,000 years, a geologic blink of the eye. Maybe half a blink. First discovered in the 1980s, Malham Cave only recently underwent a two-year study by Hebrew University and an international team of volunteer spelunkers. The job of calculating its length might have felt like it was longer than the time it took to form. The cavers often logged 10-hour days in exploring the many passages, sometimes in cold, salty water. They wielded high-tech laser measuring equipment, maneuvering around the many salt features of the cave, including stalactites and substantial salt crystals. The researchers have concluded their documentation of the cave for now, but while at it they identified places that could lead to even more extensive passageways. They are using their data to produce digital mapping of all the routes they found. 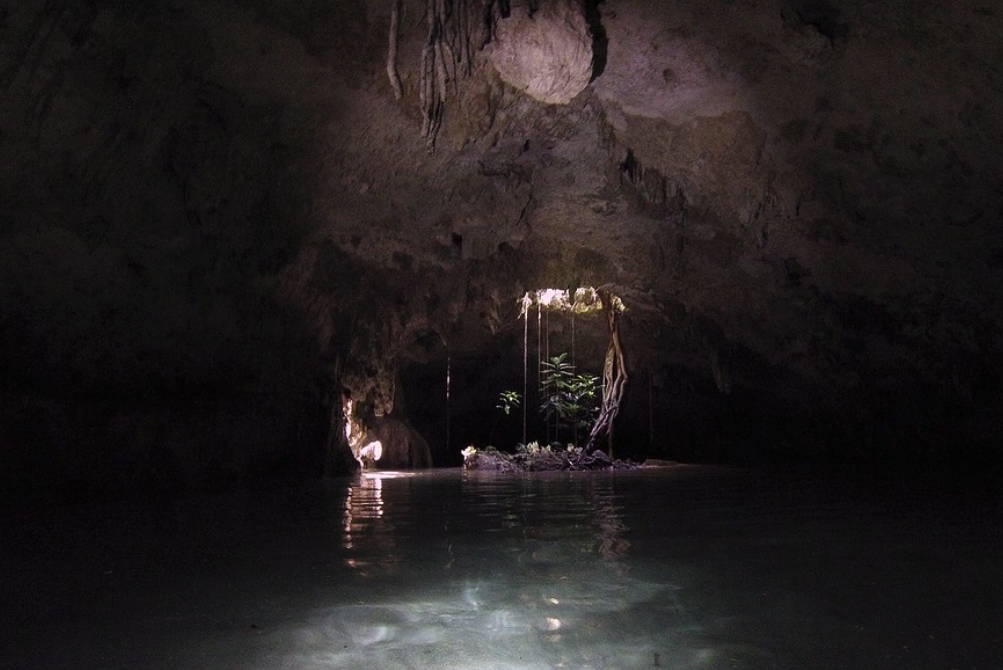 A cenote offers sunlight into a part of the extensive Sac Actun cave system in the Yucatan.

The world of more common limestone caves also saw a new record length recorded a couple of years ago when two large, previously known, flooded caverns were found to be connected. The former second largest, the 163-mile-long Sac Actun cave system near Tulum on Mexico’s Yucatan Peninsula, was found to link up with the Dos Ojos System, formerly the number-four-ranked cave. This added 52 miles to the overall extent of the Sac Actun System, for a grand total of 215 miles. That’s a long walk in the dark. Or more accurately, a dive, swim, and squeeze, depending upon the section. The enormous system holds a vast freshwater store, key to the health of the cave life and the overlying rainforest’s diversity. The extensive caves and cenotes, the sinkholes that open to the surface, are also the location of hundreds of archaeological sites preserving the history of the Maya. Work will continue, to see if other large cave systems in the area link up with the new biggest. The Yucatan Peninsula is riddled with submerged caves, hundreds of miles of them, and many are surely connected. We may have the whole surface of the Earth covered by satellite mapping, but in Middle Earth, a lot remains to be discovered.

Make a dry run to the Dead Sea to see Malham Cave, and plan your trip with this touring map of Israel by Mapah, available from Maps.com.

caption: Salt block-lined rooms have become popular places to relax and get in touch with your personal energy flow.

caption: In Poland, they made a grand hall, amusement park, art gallery, and more, out of the old Wieliczka Salt Mine.

caption: The rugged landscape in the Dead Sea area holds a variety of caves, including salty ones like Malham Cave.

caption: A cenote offers sunlight into a part of the extensive Sac Actun cave system in the Yucatan.