The Geo-Joint has been focusing on foodstuffs lately, and that’s not un-geographical. The nature of the land (or sea) has an effect upon what kind of chow comes up out of the ground or water. So continuing in that vein, our nose for geography today leads to a special bump in a very flat place. The Gulf Coast of the U.S. is a region of low relief. A hundred miles inland from much of the coast, elevations are not even up to 100 feet. So to have a spot that rises to 163 feet less than five miles from open water is surprising. That 2,200-acre spot, called Avery Island, is about 100 miles west of New Orleans, and is the highest point on the Gulf Coast. The “Island” part of its name is a bit of a misnomer in that its elevated area rises above wetlands rather than a lake or seawater, but its prominence upon the flat terrain legitimizes the name. Avery Island is roughly circular and less than 3 miles across at its widest point. It’s quite an unusual feature, and it came to be there by an uncommon process. 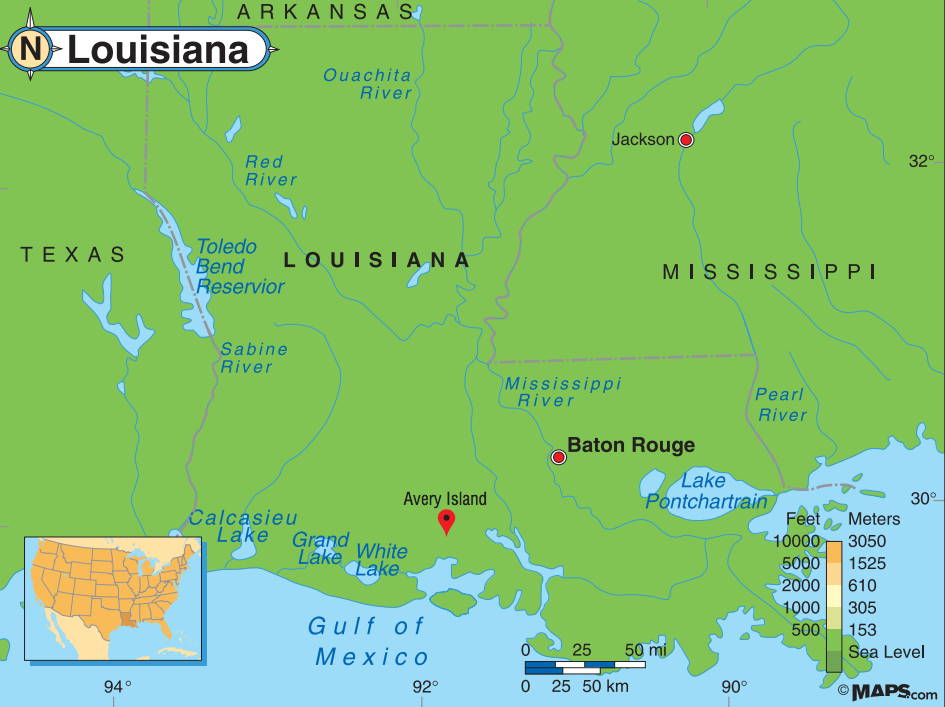 A couple of hundred million years ago, the Gulf Coast area was under a sea, which later receded to a deeper basin. The water that was left behind evaporated in the sun over time and deposited a bed of salt up to several hundred feet thick in places. Further deposition of sediment into the basin buried the salt thousands of feet deep. The enormous weight of the overlying beds put tremendous pressure on the salt. And though you’d never know it from looking at a big block of hard rock salt, when that solid stuff is under enough pressure, it actually flows—slowly, but it flows. Still, where was it going to go? Cracks and faults and fractures in the rock above the salt layer gave it an escape path, and plumes of salt were slowly squeezed up toward the surface. When they approached the surface, these columns of salt, from a half-mile to a several miles across, pushed the land above them into hills. Such a structure is known as a salt dome, and that’s what underlies Avery Island. It is the largest of five that occur along the Gulf Coast. Salt domes are known to create pockets where oil can accumulate and be tapped, and of course, they’re also good places to dig salt mines. 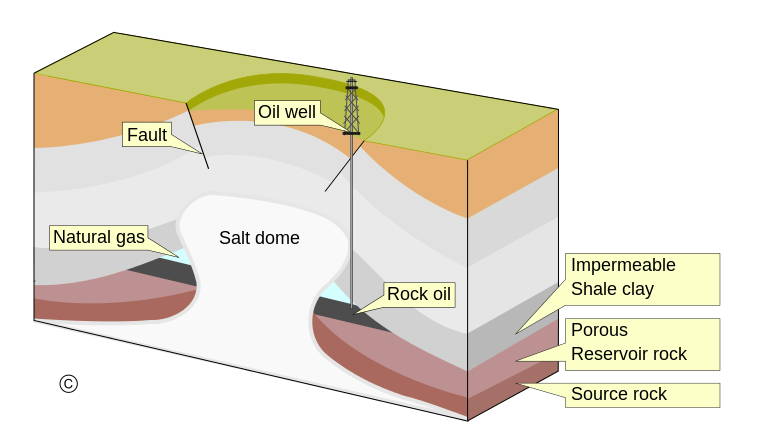 AS A SALT DOME IS FORCED UPWARD BY PRESSURE FROM SURROUNDING BEDS, IT MAY CAUSE DOWNDROP FAULTING AS SHOWN HERE, OR SIMPLY PUSH THE SURFACE UPWARD, AS ON AVERY ISLAND. 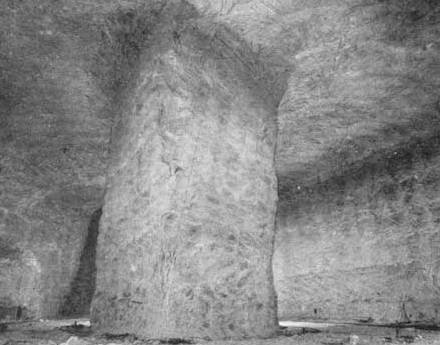 DEEP UNDERNEATH ALL THOSE PEPPER FIELDS IS ONE HECK OF A LOT OF SALT.

OK, so there’s a little hill in a swampy landscape that holds a little oil and salt, a long hike away from some great beignets and Mardi Gras parades. It might be nothing but a geologic amusement if not for its connection to culinary history—it is the birthplace, and continuing home, of Tabasco Pepper Sauce. Avery Island is named for the man who owned it by 1869, D.D. Avery. Salt mines dug into the dome under the island had helped the Confederate army with meat preservation and animal needs during the Civil War, and the island also produced a fair amount of sugar cane and some petroleum over the years. In the 1860s, Edmund McIlhenny, who married into the Avery family, began to grow a variety of tabasco peppers from seed that may have come to him from Mexico or Central America. The true origins are lost to history, but whatever their home in Latin America, they served to fill a great need. 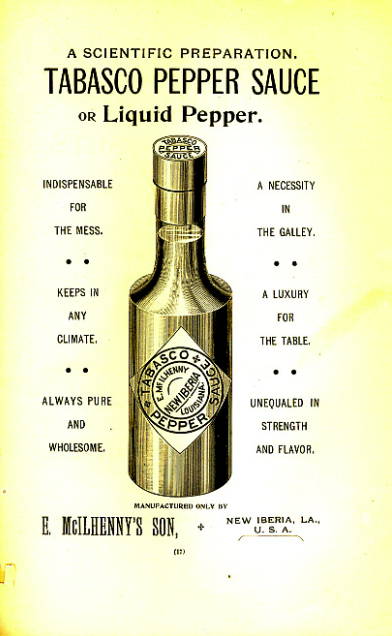 AN AD FOR TABASCO PEPPER SAUCE FROM 1900. 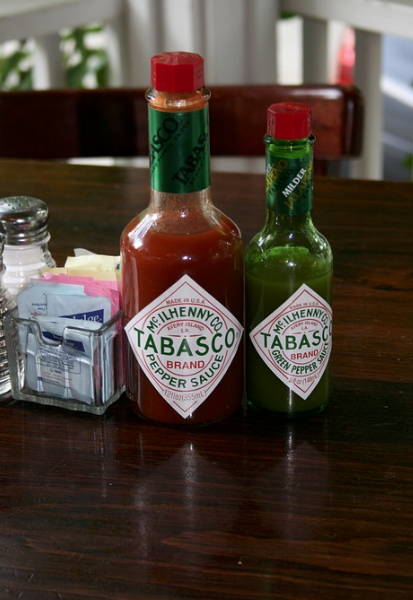 THE MODERN BOTTLE HASN’T CHANGED MUCH.

After the Civil War, life in the South wasn’t all that great. The economy was in a shambles, and food was simple and uninspiring. McIlhenny brewed up a sauce that gave meals a kick, and by 1868 he had raised a commercial crop of peppers and soon produced a modest inventory of 658 bottles. With a patent obtained in 1870, his Tabasco Pepper Sauce was gaining popularity, and only a few years later could be found all over the U.S. and as far away as Europe. The bottles he used had a narrow opening so that the product would come out a drop or two at a time. Early users who thought it might be ladled on like ketchup soon learned to be more judicious. The bottle design was well conceived— the one used today is very much like the original.

The salt under Avery Island also played a part in McIlhenny’s hot sauce production. In the preparation of Tabasco sauce, the first step is to mash up the peppers. Salt is added, and the hot mess is put into former bourbon barrels, where it ferments. Salt goes not only into the “pepper mash,” but is also poured on top of it in a thick layer. This cap of salt allows the gases of fermentation to escape, and then over the three-year aging process, forms into a hard layer of rock salt, sealing the mash from contamination. The barrels of pepper mash are stacked six rows high, numbering around 50,000 in today’s production. Each barrel holds enough mash to eventually make 10,000 two-ounce bottles. When the barrel aging is done, the solids are strained out, and rinsed through with vinegar. The liquid is put in vats where a few more weeks of aging are endured, and then it’s off to be bottled. In this efficient process, the leftover solids do not go to waste. After some further grinding, these spicy remains are sold to other food manufacturers, and even used as an ingredient in Ben-Gay! As you might imagine, little Avery Island is not large enough to produce all the peppers that the world market for Tabasco sauce demands. So the island is now a seed producer. The seeds from those home-grown peppers are sent to carefully selected farms in Mexico, Central and South America, and Africa, where vast acreages cultivate the poundage the company requires. Initial mashing and salting (with Avery Island salt, of course) begins abroad, but the barrel aging still takes place back on the island.

This is an intensely family-oriented business. The fifth generation is now in charge of the process, and the rules of growing and production are strict, and carefully maintained. The logo, like the bottle, has barely changed in 150 years. However, their assiduous adherence to tradition hasn’t kept the family from innovation. The company now makes a number of varieties of the sauce, including chipotle flavor, habanero and jalapeno pepper styles, a garlic flavor, and their own version of sriracha sauce. Tabasco now also shows up in special versions of A-1 Steak Sauce and Spam. Variety is nice, but the old standby, basic Tabasco Pepper Sauce, is still the top seller. The U.S. makes up Tabasco’s greatest fan base, and interestingly, Japan is the second-largest consumer in its far-flung global market. 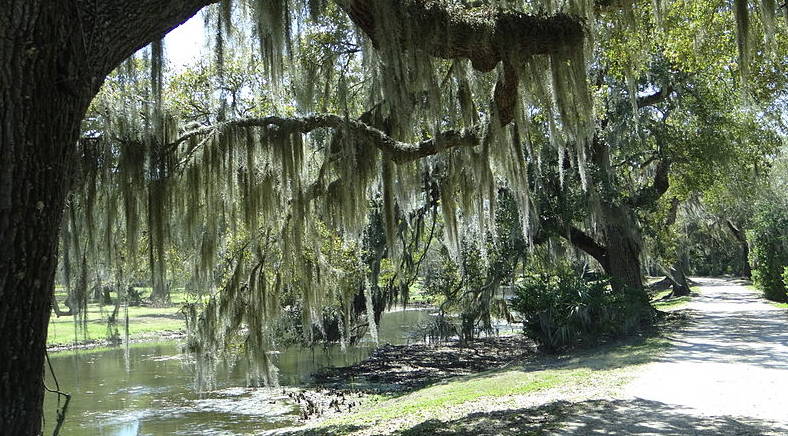 AVERY ISLAND ALSO DRAWS TOURISTS FOR THE BEAUTY OF ITS GARDENS.

Tabasco’s fortunes are strong, as evidenced by the nearly three-quarters of a million bottles that ship off each day. More worrisome than market strength, though, is the tenuousness of Avery Island itself. Sitting as it does on the far reaches of Louisiana’s wetlands, the sea is a growing threat. As Hurricane Katrina and others have shown, the storm-absorptive integrity of the marshes is weakening. Many decades of channeling the Mississippi, oil drilling, levee building, and cypress logging have left the area more vulnerable to storms. A volume of land equivalent to the size of Delaware has been lost from Louisiana’s coast into the sea in the last 80 years. To their credit, the Averys and McIlhennys have long been good stewards of nature on their island, promoting habitat for birds, alligators and bears, and in more recent years working to enhance degraded lands by planting wetland-stabilizing grasses and filling in old canals. While their efforts are locally concentrated, new diversions of sediment-carrying river flows are also helping the region’s defense. If enough of these kinds of good works are implemented, the long heritage of a hot sauce that grew from a little bump in the bayou may keep going far into the future.

Go retro, and put this classic view of old Santa Barbara on your wall. Maps.com offers this, as well as many other antique lithograph reproductions of American city bird’s-eye-view maps. Find yours!

Once you’ve had your fill of Tabasco sauce at Avery Island, why not drive on over to New Orleans for a visit? To get familiar with the city, get yourself a copy of Maps.com’s new wall map of New Orleans, available from, of course, Maps.com! 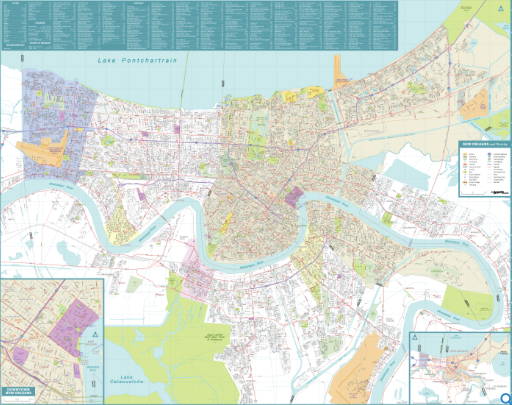 caption: As a salt dome is forced upward by pressure from surrounding beds, it may cause downdrop faulting as shown here, or simply push the surface upward, as on Avery Island.

caption: Tabasco peppers go through color changes, and are picked when they reach particular shade of red.

caption: An ad for Tabasco Pepper Sauce from 1900.

caption: Deep underneath all those pepper fields is one heck of a lot of salt.

caption: Avery Island also draws tourists for the beauty of its gardens.