Some environments just call out for calm relaxation. Warm, slow-moving water makes one just want to float and lazily move about in no particular hurry. The tropics are good for this sort of thing, and Florida provides some near-tropical conditions for an animal that just exemplifies this laid-back and unhurried lifestyle. The Florida manatee is a big, roundish, friendly looking slug of a marine mammal eminently adapted to its environment. One of three species of manatee, all of which live in Atlantic waters, the Florida manatee is actually a subspecies of the West Indian manatee. A fellow subspecies lives farther south on the margins of the Caribbean Sea, and two separate species live in South America and Africa. All are tolerant of both salty and fresh water. They prefer the calm inlets along the coast and are adapted to munching the plentiful plant life that grows along rivers and estuaries. Manatees are bulky, with the Floridian subspecies getting to around 10 feet long and weighing in at about 1,000 pounds. The biggest can get to 15 feet and crush the scale at 3,000-plus pounds. At the rear end of their overstuffed-sausage-shaped bodies, they have a broad paddle-like tail which provides propulsion that is casual most of the time, though they can demonstrate bursts of speed up to 20 mph. Their front flippers help with swimming, but also serve as limbs to walk along the bottom, and to help with feeding. 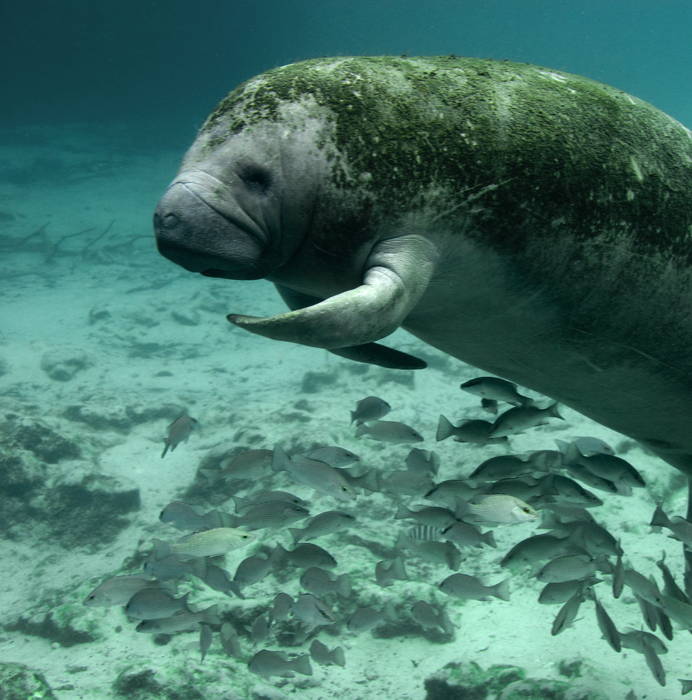 Manatees move slowly enough to be moss-covered—they’re not good at dodging speeding boats. 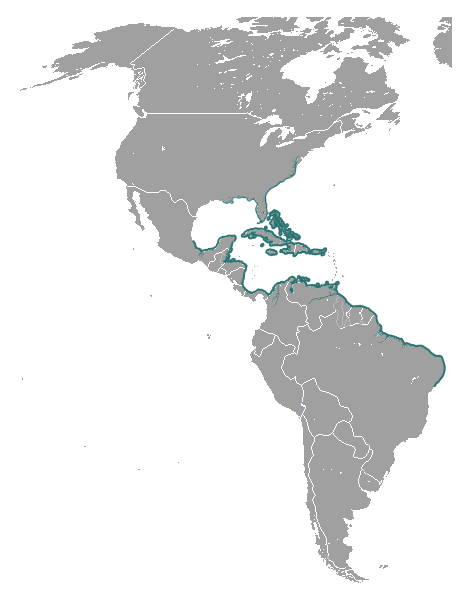 The range of the West Indian manatee, the species of which the Florida manatee is a part. Warm and protected coastal waters define their zone of comfort.

Manatees find that quiet, protected waters provide vast stores of the seagrass that sustains them. Feeding six to eight hours a day, they consume massive amounts of the low-nutrient forage. Manatees commonly feed underwater for three to five minutes at a time before slowly surfacing for a fresh breath, though they can stay down as long as 20 minutes if they like. The seagrass they feast on, unlike the grass that cows eat, comes with tiny grains of sand that are murder on their molars. The manatee chews on undaunted by the wear, however, because unlike most other mammals, it constantly grows new teeth at the back of its mouth. These slowly move forward, advancing as worn-out teeth at the front simply fall out. Another large mammal also does this—the elephant, to which manatees are related more closely than they are to whales, seals, or other large sea mammals. Manatees have a mouthful of teeth but are just as docile as their soulful round heads seem to suggest—their teeth are so far back from the front of their faces that they couldn’t bite anything if they wanted to.

Though the state is part of their name, Florida manatees range up, down, and around the Atlantic coast, travelling west to the Gulf shores of Louisiana, and even as far as Texas. More surprisingly, they are known to head north to the Carolinas and beyond. They’ve been spotted doing the town in New York City, and even summering along Cape Cod. Far more likely is to see them farther south on the Atlantic seaboard, as they are, for all their girth, not good at regulating their temperature in cold water. Unlike a whale or seal, manatees don’t develop a thick layer of continuous blubber to insulate against the chill. They do have the capacity to store up calories, sometimes useful for a different reason. Spending winters up lazy rivers in inland areas, they can become trapped in isolated ponds as water recedes. Their fat stores can sustain them for long periods as they wait for more rain to rewet their path back toward more open water. Interestingly, though, the overall size of a manatee is not due to its fat, but to the enormous size of its stomach and intestines, which have a huge job digesting tens if not hundreds of pounds of plant matter per day. 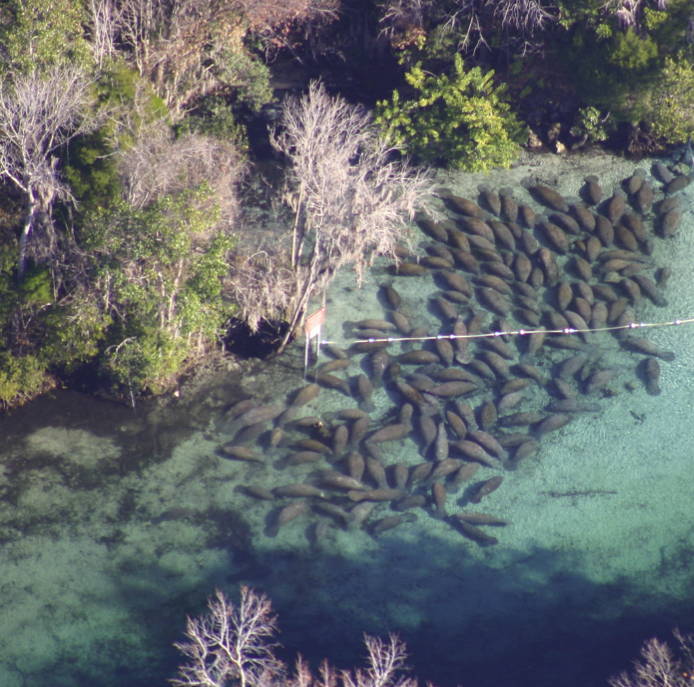 When the weather is cold, manatees flock to the warm springs of Florida’s rivers.

Overall, however, manatees have more to worry about than losing the daring explorers who might find their winter heater turned off someday. Populations of Florida manatees have fluctuated over the decades. Their numbers were down in the hundreds in the 1970s but have climbed above 5,700 by the most recent count. At various points, though, they have suffered drastic annual losses in the hundreds, due to a number of factors. As with most endangered animals, habitat loss is the most significant threat. Development along the coast has made access to accustomed watery feeding grounds more difficult, and overuse of fresh water supplies for human purposes has diminished the flow in important creeks and wetlands. Pollution has ill-affected the growth of seagrass and eelgrass, and the discharge of nutrient-rich runoff from farms has fueled toxic red tides. Manatees staying close to their traditional habitat depend upon warm springs in winter months, so if swimming acess to these heated oases is blocked by human construction, it can be fatal. Locks on rivers can crush or drown manatees, as does the stray fishing gear in which they can become entangled, or ingest. Most problematic of all for the slow-moving animals is boat traffic. Many manatees bear scars from hits by boats and their propellers as the watercraft speed by, and the collisions are often fatal for the hapless, floating victims. 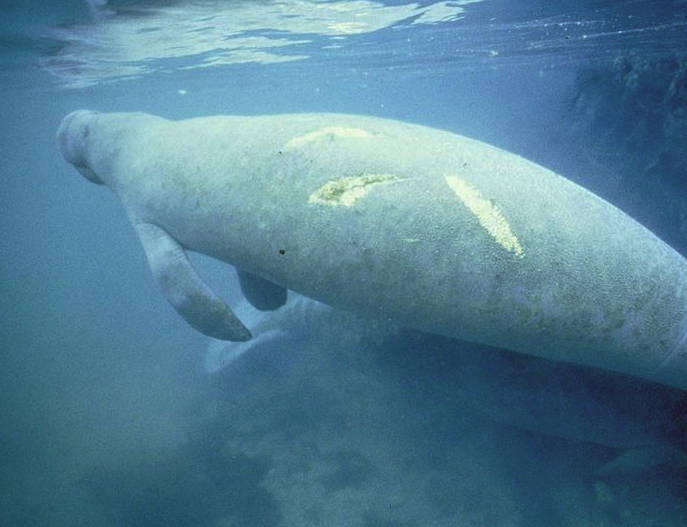 Many manatees carry the scars of boat encounters—others don’t survive the experience. 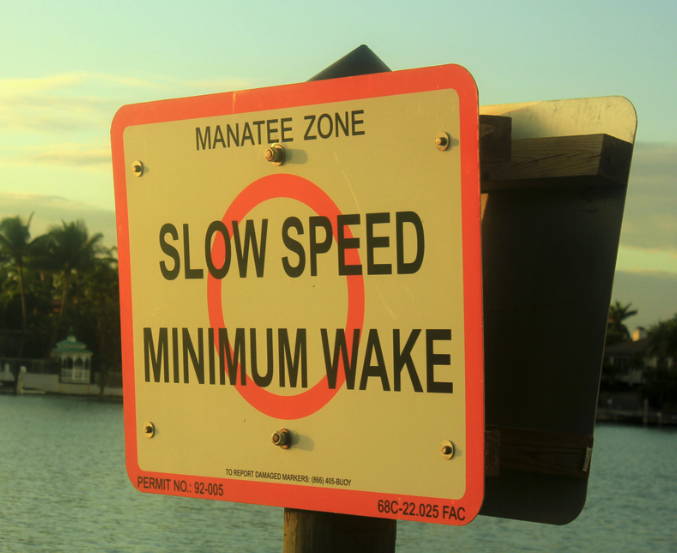 Boater awareness and compliance could go a long way toward helping the manatee survive.

The manatee doesn’t ask much. Some warm water, healthy seagrass, and to be left alone. They can maintain their laconic, defenseless ways because they have no natural enemies. Even alligators, their river neighbors, pay them little mind and even move out of the way when nudged. The manatee’s only real adversary is humans, and all their destructive, consumptive habits. Fortunately, there is a dedicated army of people who are aware of just how much these big animals mean to coastline ecology, and work hard to improve conditions for them. These efforts pay off. Blue Springs State Park, in Florida, had a population count of 14 overwintering manatees just two years before the 1972 establishment of the park. Thirty-five years of habitat remediation and protection raised that number to over 200 in 2005, and in 2018, to 485. Manatees may be slow, but they are quick to respond when humans right the wrongs that have been done to their peaceful, idyllic home waters, and those improvements are also good for the fish, birdlife and other denizens of Florida’s inland coastal habitat. 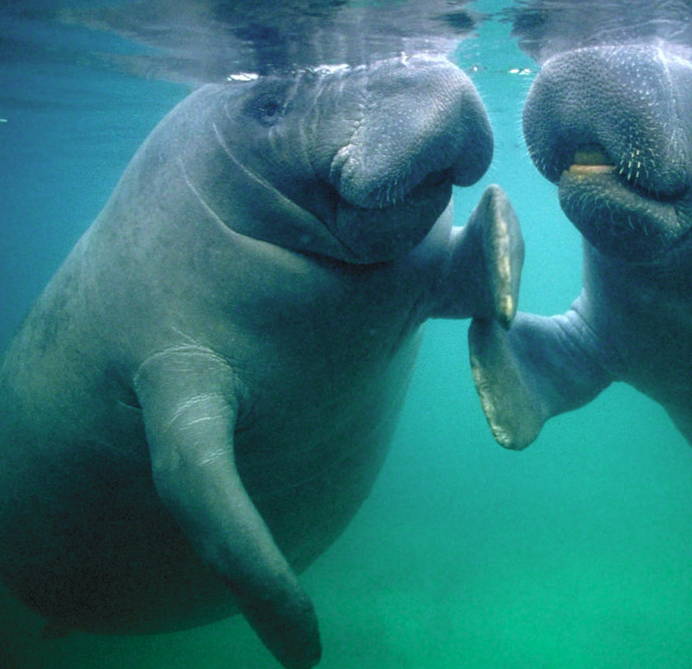 I say more protection for manatees—gimme a high five!

Take this Franko’s Florida waterproof dive spot map and reef creature guide with you as you go visit the manatees! Available from Maps.com 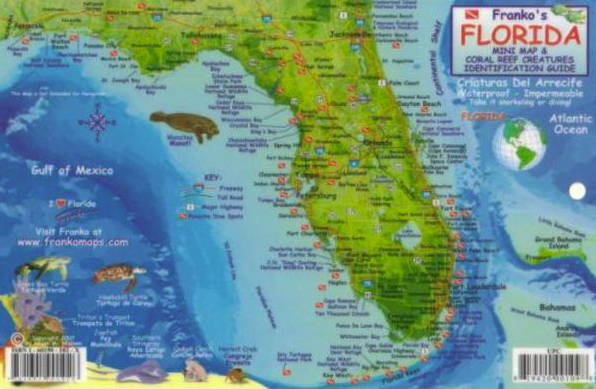 caption: The range of the West Indian manatee, the species of which the Florida manatee is a part. Warm and protected coastal waters define their zone of comfort.

caption: When the weather is cold, manatees flock to the warm springs of Florida’s rivers.

caption: Many manatees carry the scars of boat encounters—others don’t survive the experience.

caption: Boater awareness and compliance could go a long way toward helping the manatee survive

caption: I say more protection for manatees—gimme a high five!