Geo-Joint: The Cold Case of the Great Unconformity

Humans had lived on Earth for a long time, wondering how the planet came to look as it did, before some began to realize the answers were right under their feet. Geology is the science of understanding earth materials and the processes that rework them into different forms. Through this understanding comes the piecing together of Earth’s history from a molten blob to the incredibly complex sphere we live on today. Igneous rock can be dated by its chemistry, while sedimentary and some metamorphic rocks reveal their age and order by the inclusion of fossils. Sedimentary rock provides the most orderly display of time-sequencing, although few places have continuous, unbroken records of deposition. Gaps in the story exist here and there, caused either by a hiatus in deposition or an erosional event that stripped away old sediment before deposition recommenced. Where layers contain such a discontinuous profile, the contact between the older and much younger rock is called an unconformity. 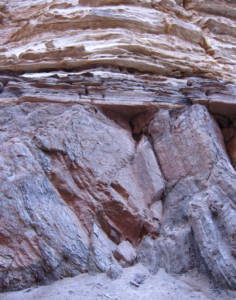 THE CONTACT OF THE GREAT UNCONFORMITY IS VISIBLE ALL OVER THE GRAND CANYON, AND AT SITES WORLDWIDE.

Time gaps in the sediment layers, and thus in the fossil record, create mysteries for geologists to solve. But fortunately, deposition is always going on somewhere, and with careful sleuthing, the story of the gradual development of flora and fauna can be demonstrated by piecing together evidence from multiple sources. However, there is one gap, the grandaddy of all unconformities, that simply wiped the slate clean. It is deservedly called the Great Unconformity, and it can be found at the lower margin of Cambrian period rock. Below the bottom layers of the Cambrian period, the rock is known as the Precambrian era, and what’s missing in between is about a billion years of rock history. To further the mystery, fossils are scant in the old Precambrian rock, and the few organisms that are preserved there are simple. Cambrian layers, on the other hand, are rich with the fossils of complex plants and animals. The Great Unconformity has vexed the world of geology and paleontology for over a hundred years. What could cause so much erosion? Where did all the sediment go? What kinds of organisms might have been preserved in all that missing strata? It’s not just a thickness of a few feet of rock that’s missing. It’s more like two or three miles. And here’s the kicker—it’s missing the world over.

THE GEOLOGIC TIME SCALE CHARTS THE PLANET’S PAST. THE TRANSITION FROM THE PRECAMBRIAN ERA TO THE CAMBRIAN PERIOD IS WHERE THE RED SHADES TURN TO FUCHSIA. 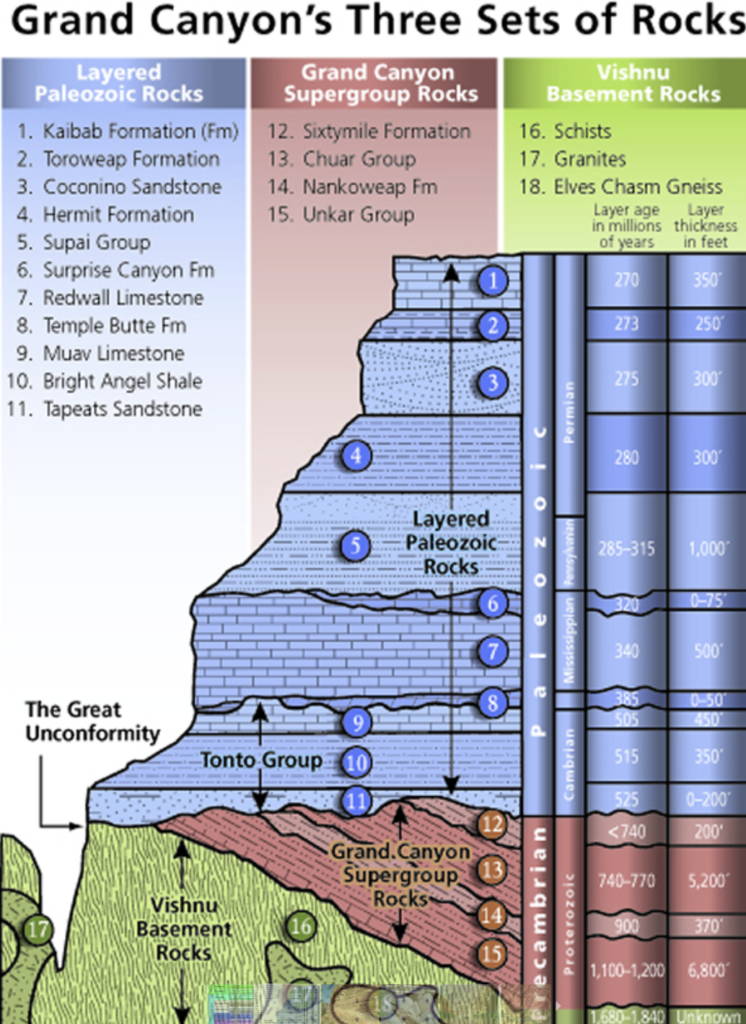 THE MARCH OF TIME, AND THE GAP IN THE ROCK RECORD, ARE EASIER TO SEE ON A DIAGRAM.

Probably the starkest example of the Great Unconformity can be seen in the Grand Canyon, where Cambrian rock sits above the Vishnu schist, a Precambrian basement rock. Many of the structures in the Grand Canyon can take your breath away, but in 1869, early explorer John Wesley Powell knew his geology well enough to recognize a sharp change in the rock layers, and the significance that it had. Powell couldn’t date the rocks with the technology of his day, but later geologists established the enormous time jump represented in the Grand Canyon, and identified similar gaps in places around the world. Some instances of the Great Unconformity record even greater missing time spans than the 250-million- to 1.2-billion-year gaps seen in the Grand Canyon. In Wyoming, for instance, rock layers with an age difference of as much as 2.28 billion years are in contact with one another. In the library of Earth’s history, one fifth is missing. 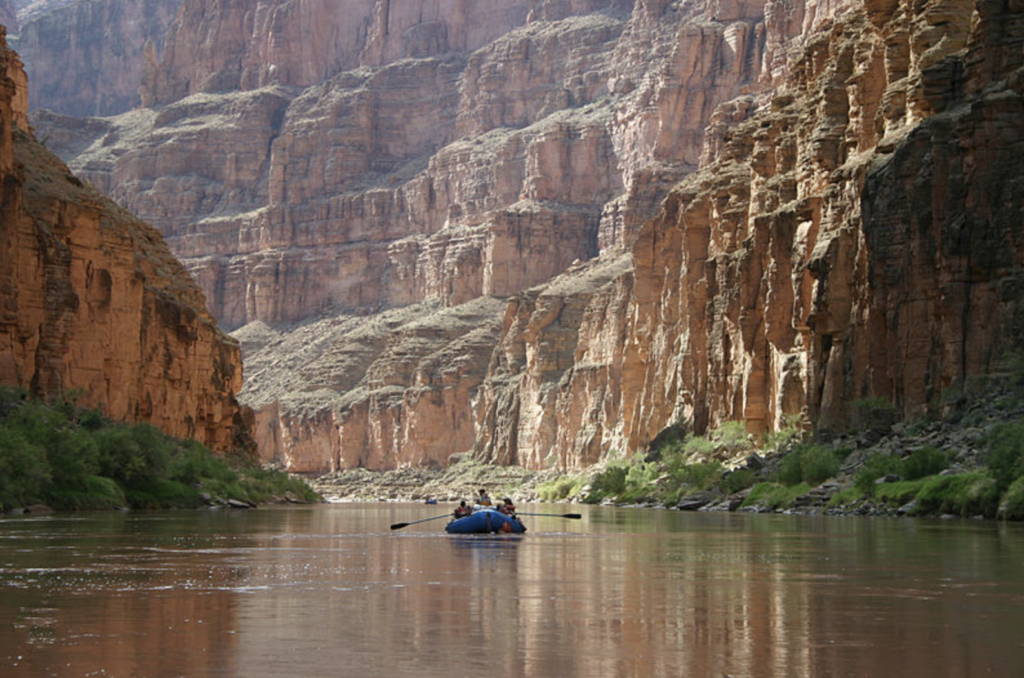 THE CONTACT OF THE GREAT UNCONFORMITY IS VISIBLE ALL OVER THE GRAND CANYON, AND AT SITES WORLDWIDE.

Any explanations for this gargantuan process must account for a number of circumstances, and none have seemed to cover all the bases convincingly. Recently, however, a team of scientists have gotten closer to solidifying an old theory. Back in the 1970s, it was suggested that some of the many ice ages that Earth has endured could have been so extreme as to produce what has been called Snowball Earth, involving worldwide glaciation. Between 720 and 580 million years ago, it seems to have occurred several times. Such a process, by one theory, may have started with the collision of the Milky Way with a dwarf galaxy, and the consequent massive release of gamma rays from the supernovas of colliding stars. These rays would have degraded the heliosphere, leaving Earth more vulnerable to cosmic rays. These rays, in turn, are thought to ionize molecules, which then aggregate other molecules that become condensation points for moisture, and the formation of clouds. Lots of clouds. Worldwide clouds. So much cloud that sunlight didn’t reach Earth’s surface for a long time, and glaciers formed all over. The more glaciers and clouds, the more reflected light and heat. Compounding the chill, the sun’s output was also weaker at this time, and the days were a few hours shorter. Other theories on the genesis of worldwide glaciation exist, but by whatever mechanism, Earth became a profoundly cold place. 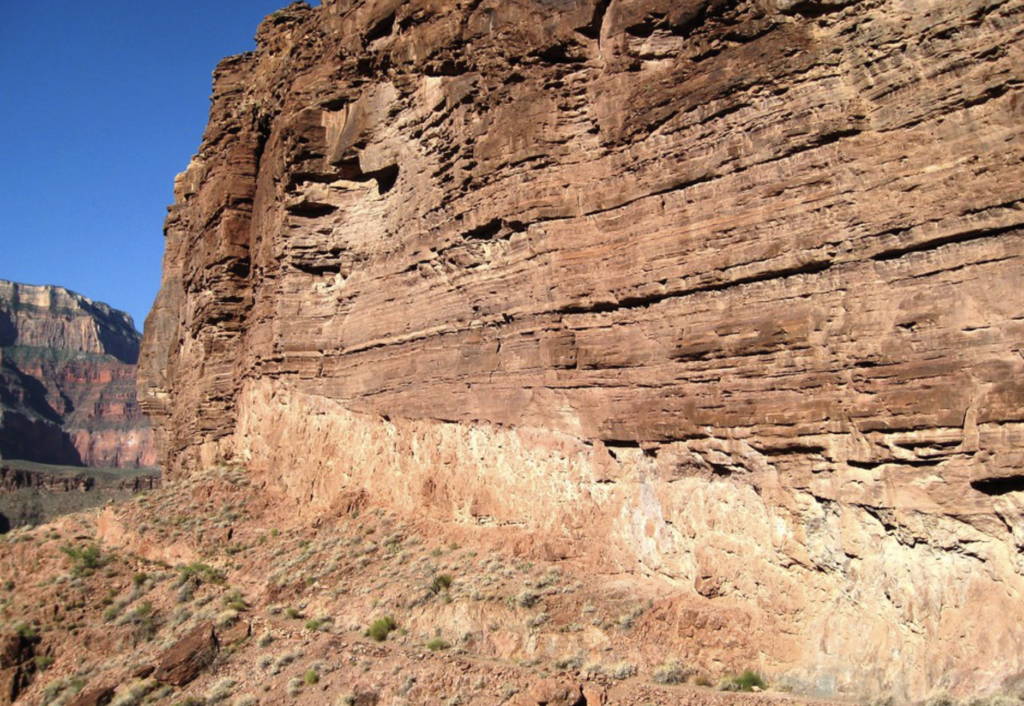 THERE IT IS, ON A GRAND CANYON ROCK WALL, THE GREAT UNCONFORMITY. HORIZONTAL BEDS OF CAMBRIAN ROCK DIRECTLY OVERLIE METAMORPHIC AND IGNEOUS ROCK MORE THAN A BILLION YEARS OLDER.

At about this time, the singular continent called Rodinia (Pangaea’s predecessor) was undergoing a substantial period of uplift. Geologists can determine this from the study of zircons found in rock just below the Great Unconformity. Zircon is a remarkably stable mineral that persists under conditions that more easily transform other rock materials. Zircons retain helium relative to the depth of their formation—as they rise and cool, helium becomes trapped within the zircon’s crystal lattice. Through a complicated interrelationship between the helium content of the zircons, and the decay rate of radioactive uranium and thorium (which provide the helium), the time frame and volume of the uplift can be calculated. These data indicate there was a mega-continent-wide uplift, not merely a localized push under a particular mountain range. With this much newly sprung relief, the grinding glaciers formed in Snowball Earth could have bulldozed away the miles-thick layer of rock, one third of the Earth’s crust, that is missing. Remember, this all would have taken place over a very long time—something like 10 million years during each episode of Snowball Earth.

But where did all that scraped-off rock and sediment go? Here is where the theory makes use of deep time to explain the disappearance of so great a quantity of material. The collected rock mass would have been pushed downhill, and into the ocean basins. With all this material having been deposited onto ocean floors, the grand tectonic conveyor belt of ocean spreading centers and subduction zones could carry the deposits down into the molten layers of Earth, effectively removing it from view, and rendering those rocks into an unrecognizable form. The durable zircon chemical history trail also substantiates the notion that large volumes of crustal material were being remelted in subduction zones following the uplift. As further support for this grand theory, scientists have found a lack of evidence for meteor strikes that date before the latest Snowball Earth event. Given the continuous history of meteor collisions since then, it is reasonable to assume they were happening regularly at that time too, but any such craters would have gotten scraped away by the ubiquitous glacial activity. The erosional power of a dynamic Earth can erase the visible evidence of even worldwide events.

More theories have sprung from this complicated scenario, including that the shallowed seas that resulted from the enormous inflow of sediment, and the chemical nutrients from that sediment, created a new ocean chemistry for the sea creatures that survived under the ice-capped oceans of Snowball Earth until it thawed. The explosion of new life in the warmer Cambrian period, as seen in the fossil record, may have been given their jump start by these conditions. Some think the missing rocks may not have held a long line of slowly evolving and increasingly complex fossils but that the sudden appearance of diverse life forms came about as a direct result of the hugely destructive and transformative events that created the Great Unconformity in the first place. Clearly, our planet has been through some long, severe experiences that seem impossible to us today. The vastly rich and diverse environment we enjoy is proof of Earth’s ability to transform and reinvent itself given enough time. One day there will likely be no humans on this planet due to any number of scenarios, and if conditions are severe enough, life may be reduced to a tiny fraction of its current status. Short of the sun going supernova, though, life will reconfigure and rebound, and Earth will become a new, different, and equally fabulous place.

Has reading about the Great Unconformity got you to thinking Grand Canyon road trip? Put this gorgeous, topographically detailed, National Geographic map of the Heart of the Canyon on your wall to gaze at and plan your trip. Get it from Maps.com. 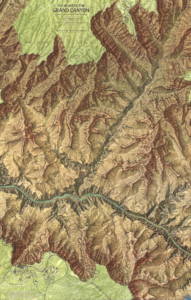 caption: The geologic time scale charts the planet’s past. The transition from the Precambrian Era to the Cambrian Period is where the red shades turn to fuchsia.
source: Wikimedia Commons: USGS (Public domain)

caption: The march of time, and the gap in the rock record, are easier to see on a diagram.
source: Wikimedia Commons: National Parks Service (Public domain)

caption: The contact of the Great Unconformity is visible all over the Grand Canyon, and at sites worldwide.
source: Flickr: Chris M Morris (CC by 2.0)

caption: But if it’s all too much to wrap your head around, just go float through it and marvel at the mystery of deep time.
source: Wikimedia Commons: National Park Service (Public domain)