Geo-Joint: Wander the World but Watch Your Step

The ground we walk on has a variety of compositions, and the terra isn’t always firma. Sometimes it’s just more arduous—struggling across a sand dune, or risking a turned ankle on a cobble beach or a scree slope. Some other substrates can be life-threatening. The first that may spring to mind is quicksand. How many Tarzan-style adventure movies in the ‘30s and ‘40s included a hapless jungle explorer accidentally walking onto some seemingly solid sand, only to find himself up to his shins in quicksand? Of course, he struggles mightily to free himself, and perhaps others are there to help, and they get stuck too. The time-lapse next scene shows them up to their chests, and later, nothing but floating pith helmets mark their sandy graves. Thrilling stuff, sure to make everyone gasp and be horrified—perfect for Hollywood. But what’s really going on here? Quicksand is just super-saturated sand that you might find at a spring, or by a river, bog, or ocean. Sticking your foot in it allows some penetration below the surface because the saturation lessens friction between the grains and allows them to part. Pulling back up, however, creates a vacuum below your foot and drains some of the interstitial water from the sand being lifted, making it become more viscous. And while you’re pulling up on one foot, you’re putting all your weight on the other, which goes down deeper. This will continue the more you struggle, and you might get immersed to your chest. But that’s about it, because even though your lower extremities are denser than quicksand, your torso (containing those emergency airbags that you breath with) is less so, and you will stop sinking. 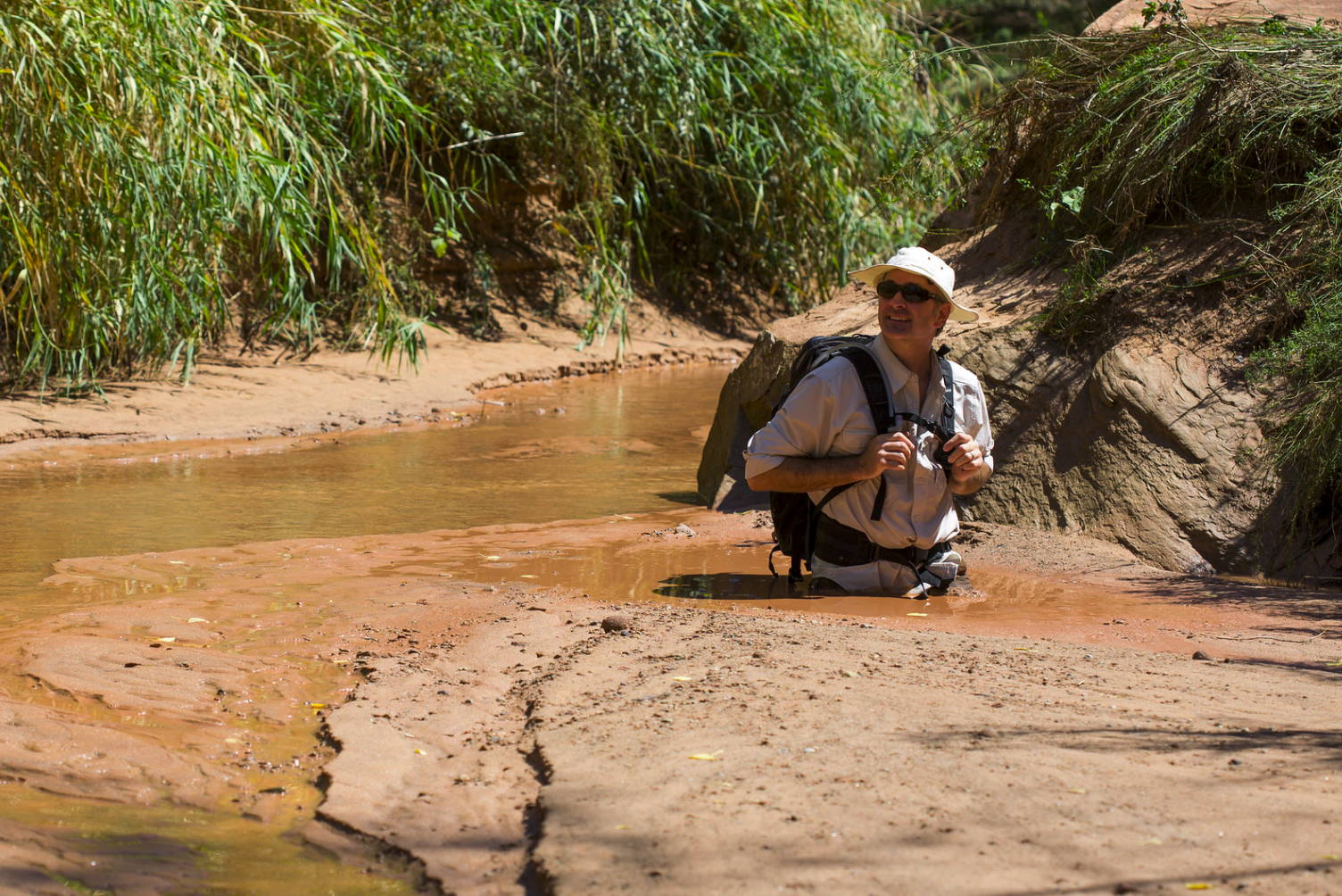 You’ve really got to pay attention to where you’re going. 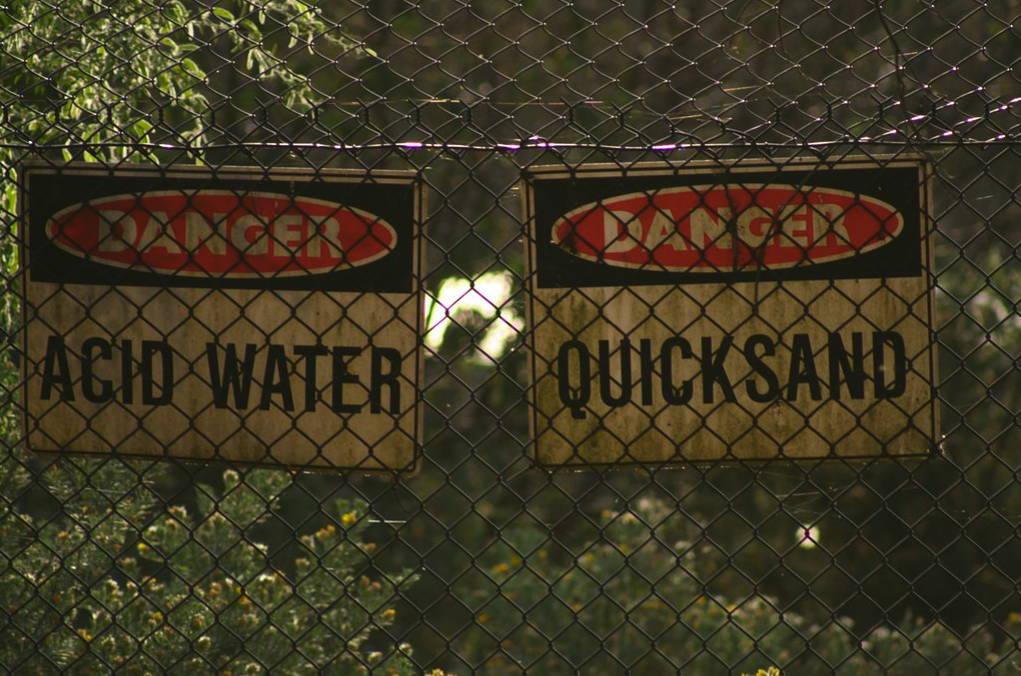 A particularly bad place to get stuck in quicksand.

Now, it’s no fun to be stuck in the ground up to your lungs. If you’ve become trapped in quicksand around a desert spring, the blazing sun will be your worst enemy. If instead there’s a rising river or an incoming tide where you’re stuck, you’re well and truly screwed, but here’s what you should have done when you first started to sink: lie down. Getting onto your back or stomach spreads your weight out over a much larger area, so the pressure on the quicksand is much less. Then the trick is to “swim” your way to more solid ground. This involves more wiggling than brute force. The force needed to unstick a foot stuck in quicksand at one centimeter per second is something like the force required to lift a medium-sized automobile. So unless you’ve been practicing doing clean-and-jerks with your Corolla, forget trying to power out of the predicament. Besides, even if you had the strength, you might rip your foot off. The wiggling action that helps you move gets the water to start filling in around the grains and turns the sand into a more soupy medium. Next time you’re down at a sandy beach or riverside, try shifting your weight from foot to foot, and watch the liquefaction and the sinking begin. Try to pull out in a hurry once your feet are covered, and it’s really hard! No doubt you did this as a kid, and you didn’t die. Really saturated sand, such as sand receiving water from a spring below it, can be far more easy to sink into. It can take a long time to work your way out with the layback-wiggle-swim method, but it beats getting trapped and drowning if the water should rise. That kind of scenario is really rare, especially since quicksand is commonly just a few feet deep, so there are other things you should be more worried about when you are out walking. 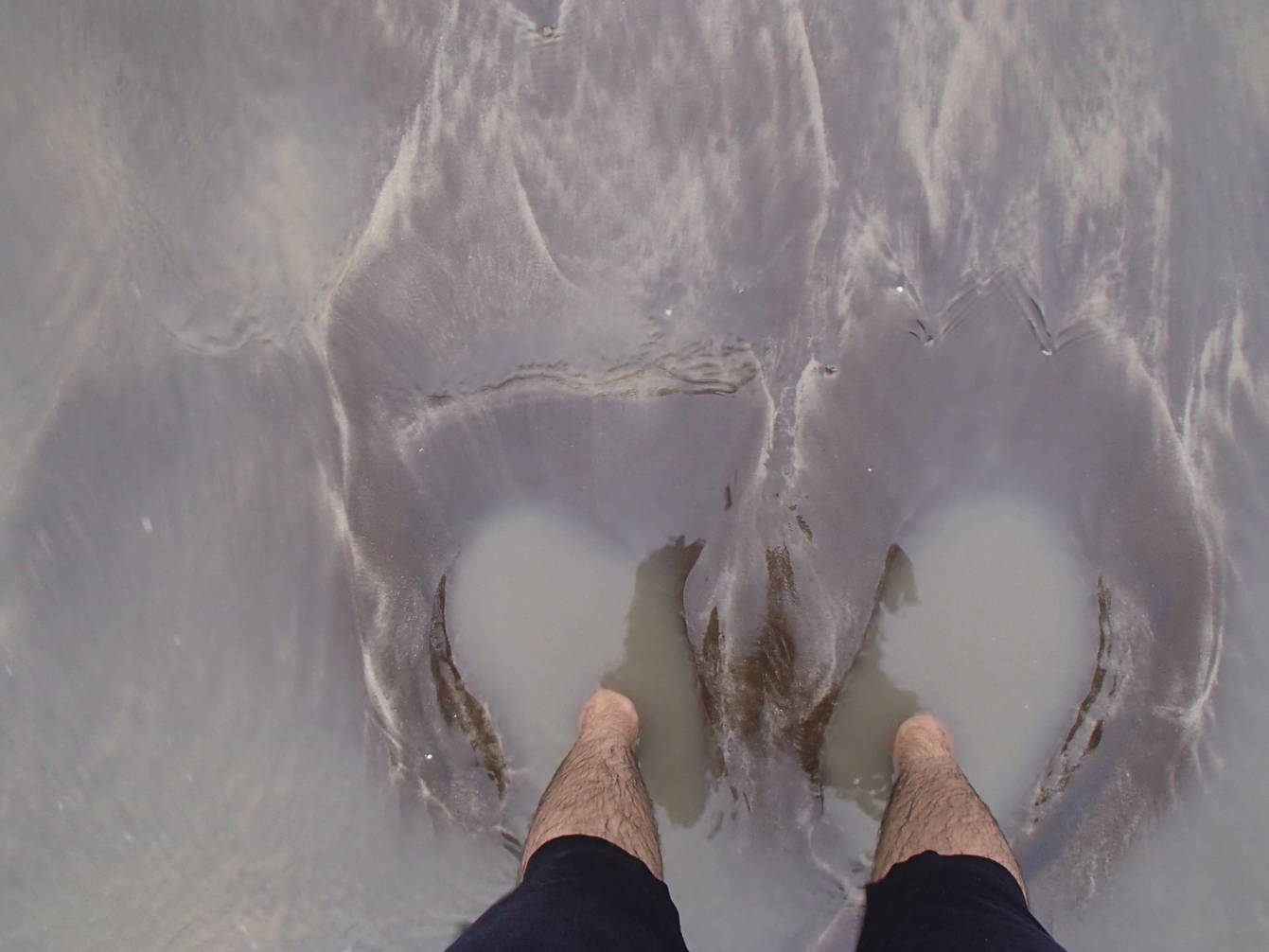 Stomping your feet will sink them at the beach, but not very deep.

One of them is an even more vanishingly rare occurrence, but potentially a whole lot worse if you should get stuck in it. Nothing is quite as sticky as tar. For the most part, petroleum is deep underground, but when it comes to the surface through fractures in overlying rock, it can collect in depressions. Heated by the sun, the volatile components of the oil evaporate away, leaving behind thick, sticky, black tar. Rainwater collecting on the surface of such a tar pond would give the appearance of a normal water source, tempting animals to enter and find themselves sinking into the ooze. It wouldn’t take much more than an inch and a half of the stuff to bind a large animal to the spot, and the more they sank, the more their fate would be sealed. This is what happened from 40,000 to 8,000 years ago in what is now downtown Los Angeles, at the site known as the La Brea Tar Pits.

Something on the order of 3.5 million organisms from mice to mammoths and more, found their way into this black muck, and there they stayed and became fossilized. Thousands of the mammal remains found—some 90 percent—are of carnivorous mammals. Why? Apparently few could resist jumping onto prey stuck in the tar, only to become trapped themselves. In some cases, a high-speed chase may have led eater and eaten to blunder into the pools simultaneously. So saber-toothed cats and dire wolves went after giant ground sloths and bison, and all left their bones behind. Animals might take four or five months to fully sink, all the while drawing the hungry. Predatory and scavenging birds like eagles, condors, and vultures also took the bait and joined the club. It all made for a fantastic trove of paleontological evidence. Surprisingly, such entrapment scenarios probably didn’t occur frequently. Given the thousands and thousands of years of their existence, the pools might only have trapped a large animal every 10 years or so to have amassed all the bones that have been excavated. Paleontologists dig through old, hardened tar pits infused with the sediment that washed down from the Santa Monica Mountains and covered layers and layers of deposited bones. Fresh seepage of oil still feeds other, still-gooey tar pits. The Los Angeles Basin was rich in oil, and a bonanza for early petroleum exploration. Before that, Native Americans found the tar useful for caulking baskets and canoes, and binding together stone and wood. For a long time, settlers in the region thought the bones found at the tar pits were from the cattle they had brought, but more academic study, beginning in 1901, showed many to be from species no longer in existence. Perfectly sealed away from both erosion and the decomposing effects of water and oxygen, the bones were kept in an excellent state of preservation, if fairly challenging to clean off. 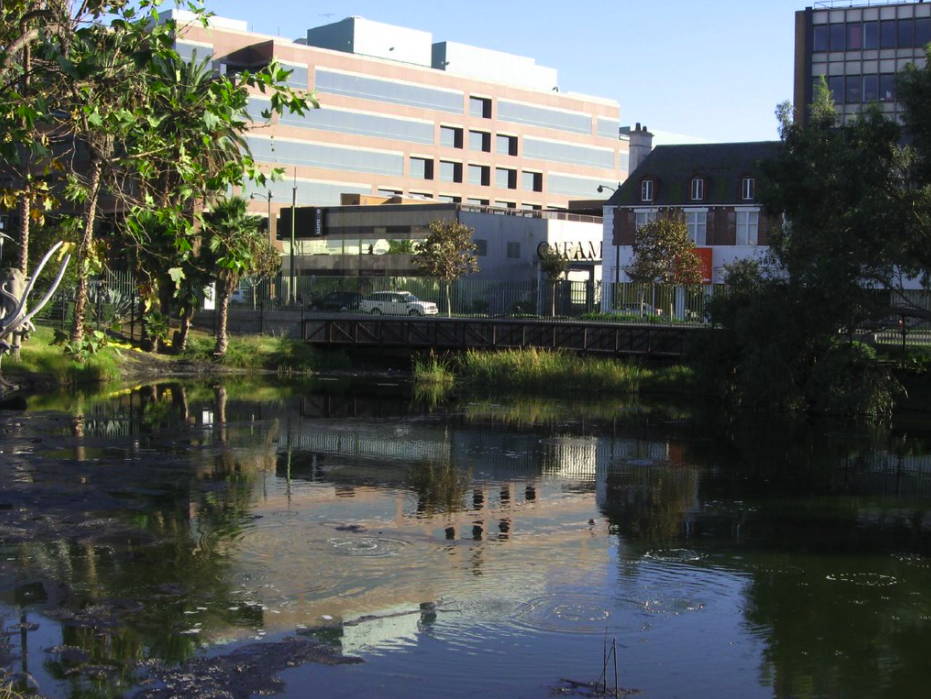 The La Brea Tar Pits coexist with an urban landscape. 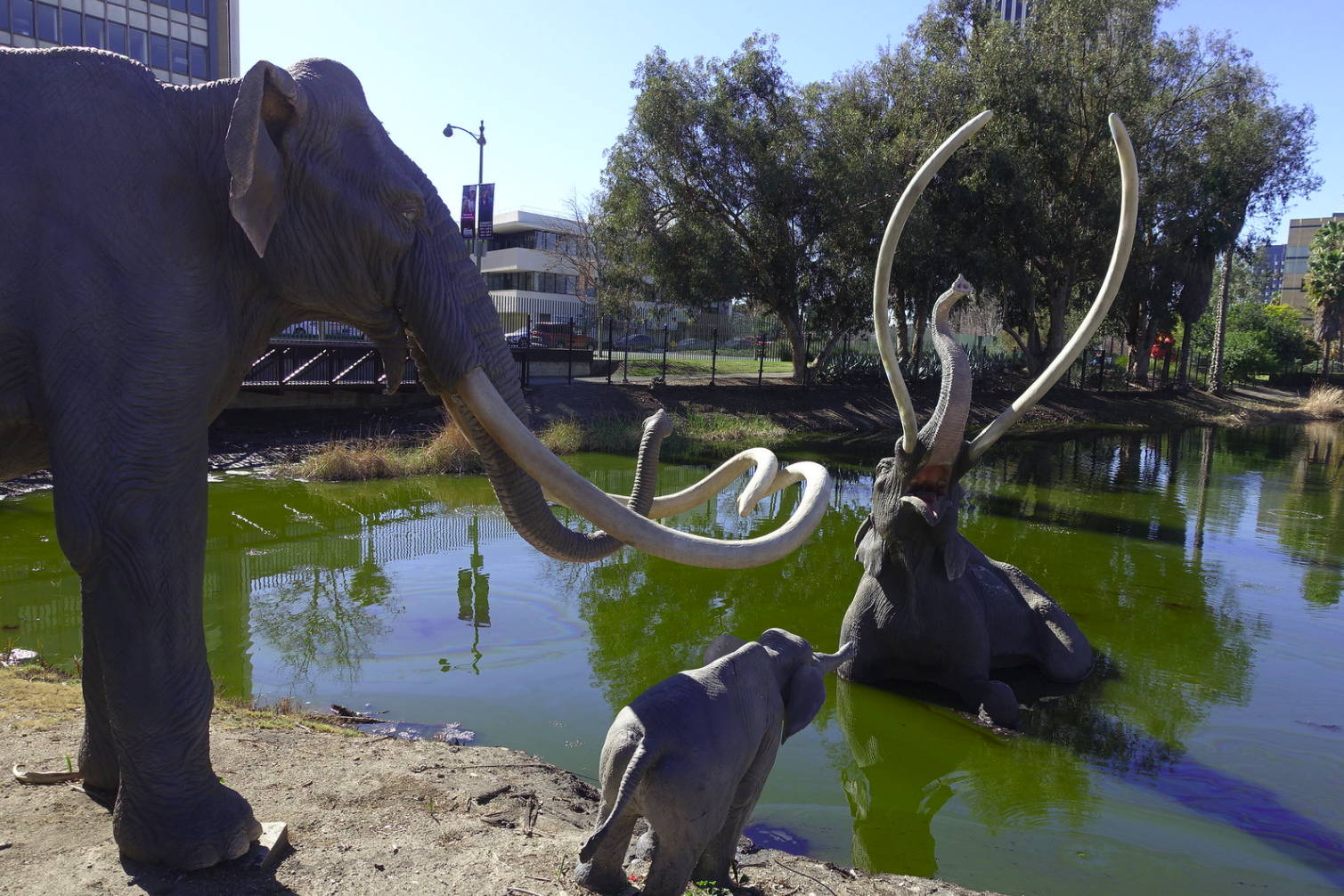 The mammoth family in permanent distress over Mom, stuck in the tar. 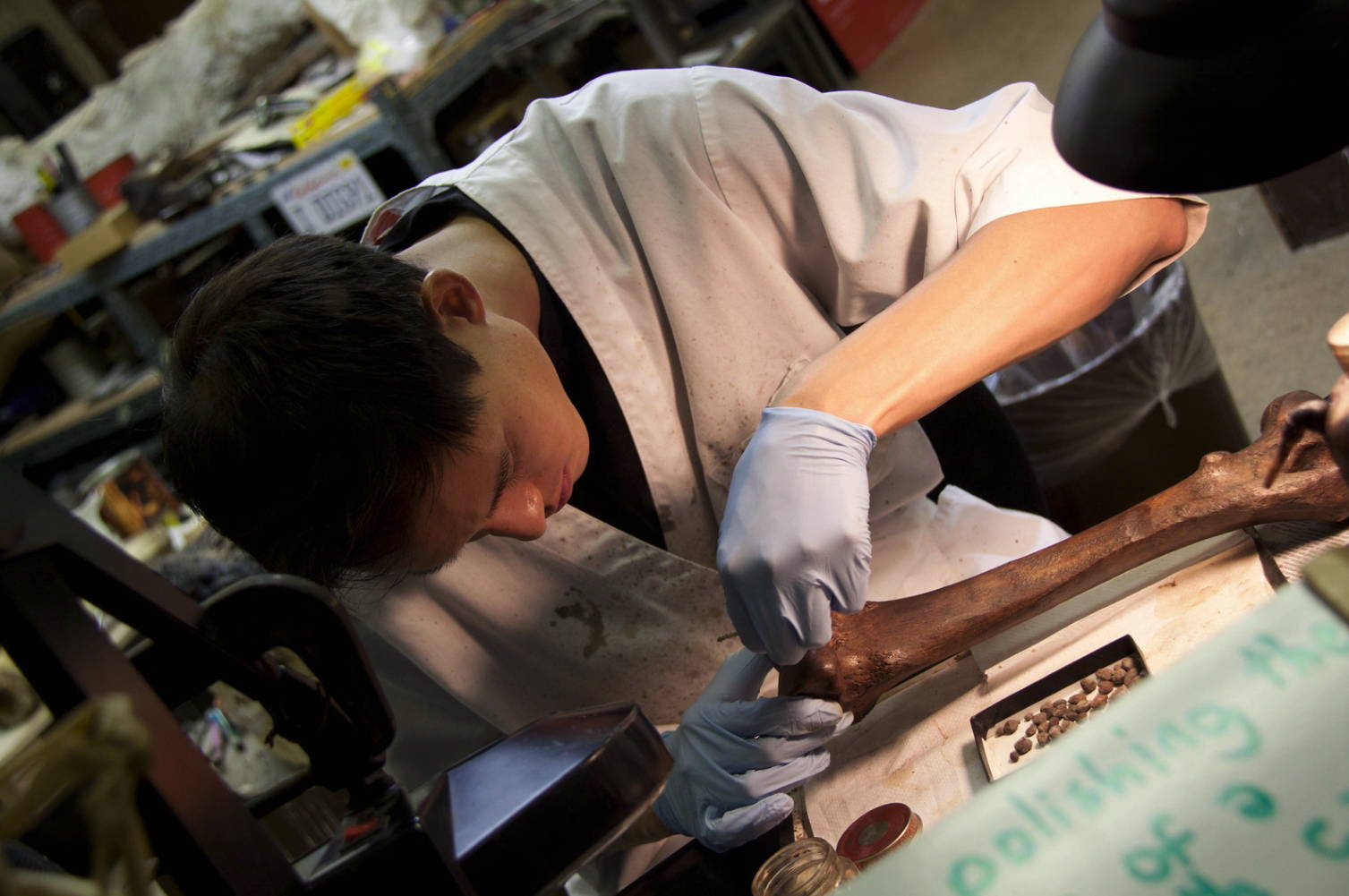 Cleaning newly excavated, fossilized bones for study or display is an ongoing task. 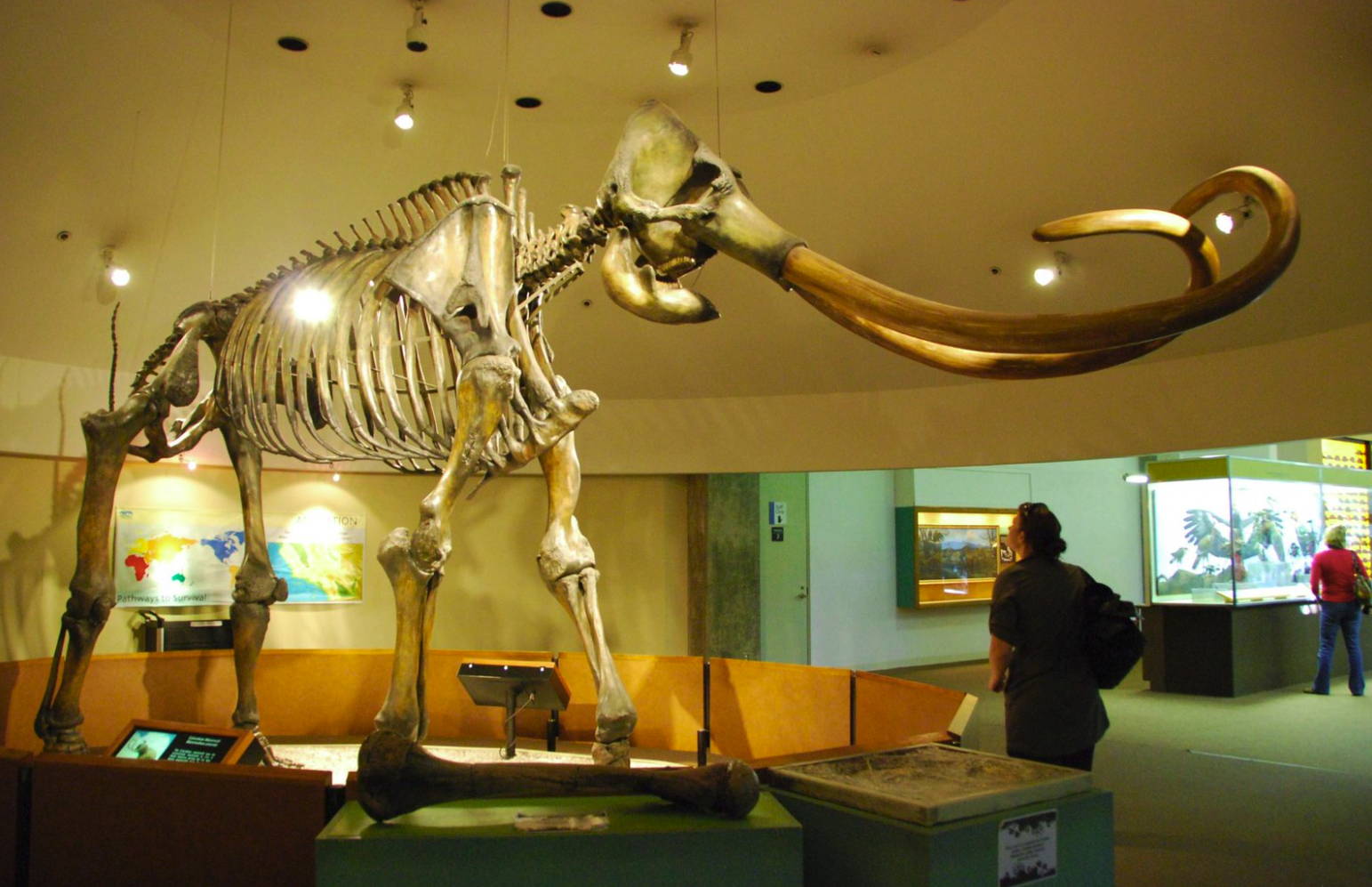 Few full skeletons have been found, but plenty of individual bones are pieced together to re-create the impressive skeletons of big mammals and others at the George C. Page Museum.

The big mammals and their fierce predators are impressive, but the finds include a total of 59 species of mammals in a variety of sizes. Bird species number over 135, to say nothing of the myriad insects and fossil plants and pollen in the mix. All this has been painstakingly dug up, cleaned, ID’ed, cataloged, and displayed at the on-site George C. Page Museum, in the middle of one the world’s largest urban areas. Millions of schoolchildren have had their first view into the world of fossils and California pre-history at the museum and surrounding grounds, which feature ongoing digs and of course, real-live pools of tar, slowly releasing fat bubbles of methane. That impressionable scene is all the more memorable for a heart-wrenching tableau of a life-sized, fiberglass model of a mammoth mom stuck in the tar with her trunk raised skyward, while her mate and baby stand helpless on the shore. It has been a teaching tool and a tourist draw for decades, and though the museum and grounds are about to undergo renovations in the coming years, the mammoth family will remain in their frozen angst for the foreseeable future. At least ten other asphaltic sites, as they are called, exist in the world, mostly in the Americas, from spots in Southern California to Venezuela, Peru, and Ecuador, as well as Cuba and Trinidad and Tobago. And there’s even one in Azerbaijan, half a world away. None are as famous or as well-studied as the La Brea Tar Pits, a place that preserves some very old history in a very modern city. 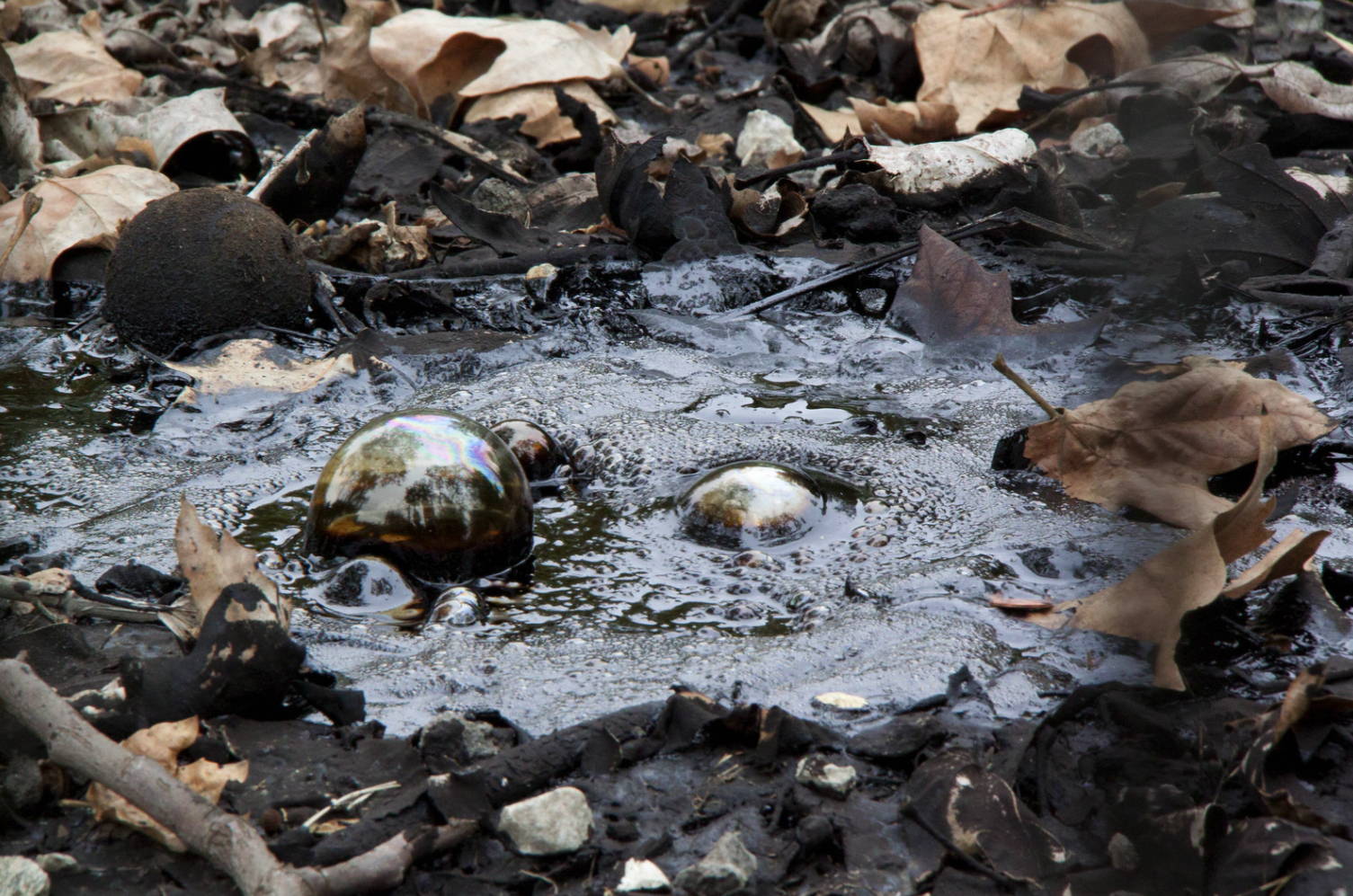 The methane still bubbles up to this day, reflecting a fisheye view of a much-changed environment.

See ancient tar pits as well as a bustling, modern, hip city when you journey to Los Angeles! Let this map and guide by PopOut Products show you around. You can get it right here at Maps.com. 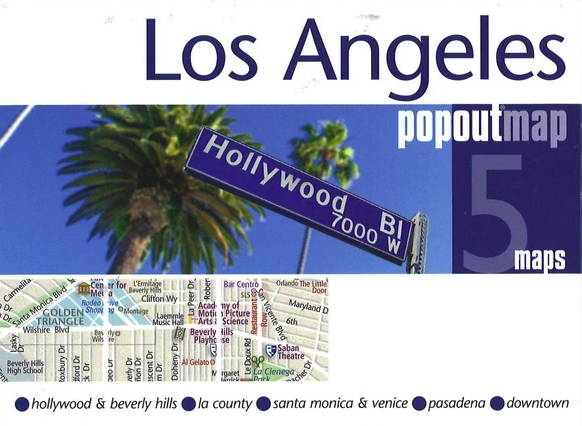 caption: You’ve really got to pay attention to where you’re going.

caption: A particularly bad place to get stuck in quicksand.

caption: Stomping your feet will sink them at the beach, but not very deep.

caption: The mammoth family in permanent distress over Mom, stuck in the tar.

caption: Few full skeletons have been found, but plenty of individual bones are pieced together to re-create the impressive skeletons of big mammals and others at the George C. Page Museum.

caption: The methane still bubbles up to this day, reflecting a fisheye view of a much-changed environment.