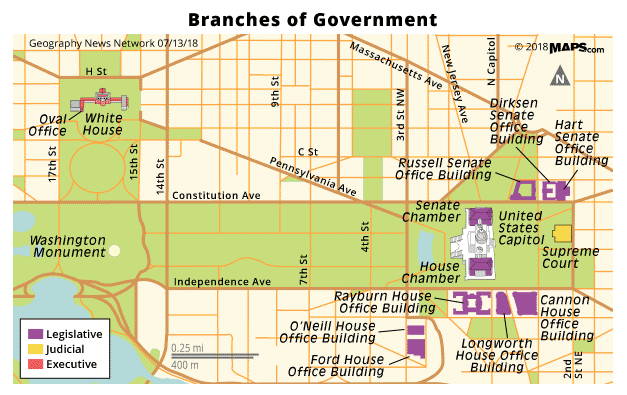 The United States has three branches of government: legislative, judicial, and executive. Each branch plays a different role in American democracy.

The legislative branch includes the Senate and the House of Representatives. These two houses of Congress make the country’s laws. The judicial branch includes the Supreme Court. The Court’s nine justices interpret and make rulings about laws, based on the U.S. Constitution. Their interpretation of the law helps define what Congress enacts.

A SINGLE LEADER OF A DEMOCRACY?

Today, it is hard to imagine how original the idea of a president heading a democracy was at first. When the office was created by the nation’s Founders in the late 1700s, it was different from any political position that had come before it. It was very unusual to have a powerful, single leader in a democratic government.

“For thousands of years before the American Constitution people thought a strong executive power and a democracy – what Jefferson called self-government–were incompatible,” explained Sidney Milkis from the Miller Center of Public Affairs at the University of Virginia. “Because how could a sovereign people delegate tremendous responsibility to one individual and still consider themselves a democracy, even a representative democracy?”

During the era of the American Revolution, a single political leader with a large amount of power usually headed a monarchy. In a monarchy, a country is ruled by a king or a queen. In fact, the Founders of the United States were suspicious of powerful kings and queens. Having just fought Britain in the Revolutionary War, many colonists were concerned that the leader of the new country might become as powerful as Britain’s King George III. They also worried that powerful leaders might end up making decisions to their own advantage and not to the benefit of those who elected them.

The idea of a president seemed to conflict with the democratic ideas set forth in the Declaration of Independence. “People were very suspicious of anything that would resemble monarchical rule,” explained historian Ray Raphael.

At the same time, the Founders knew that a government led by an elected legislature had pitfalls, too. If every decision must be made by a group of legislators, some believed, it could take too long to solve important problems. Also, if an issue was especially complicated, a group of legislators might never reach agreement about it. In other words, without a final decision maker, some problems might not ever get solved at all.

Some of the Founders favored a president with weaker powers. “There were people like James Madison and [Thomas] Jefferson, who thought the president’s power should be limited, and the term president meantpreside. And Congress and the states should be the leading venues of American democracy,” Sidney Milkis explained. Other Founders, like Alexander Hamilton, thought that a powerful president would actually be what Milkis called “the anchor of American democracy.” If the president did not have enough power, Hamilton thought, he or she would be unable to direct large projects for the public good.

Eventually, the Founders partly agreed with Alexander Hamilton. They knew the country needed a single leader who could make decisions quickly in a time of emergency, such as during times of war or in a disaster like a flood. They also believed that a single decision-maker would be more accountable to citizens than a group of leaders—it would be hard to determine who contributed what to a decision. However, like Madison and Jefferson, the Founders also worried about giving one individual too much power. The solution was to have a single president, but then place limits on this person’s power.

THE CONSTITUTION AND THE PRESIDENT’S DUTIES

The Constitution of the United States is the highest set of laws the government must follow. It discusses the role of the president, including limits to the position. For example, today, he or she can be elected for only one four-year term at a time, with a maximum of two terms, or eight years. In addition, the president shares power with the judicial and legislative branches. Sharing power among all three branches of government is known as the system of checks and balances. Each branch has abilities but also limits.

What can the president do, according to the Constitution? The president is the commander in chief of the military. He or she is also the leader of the executive branch, and is thus able to nominate the heads of all executive departments and agencies. One of the president’s duties is to provide Congress with an annual report called the State of the Union. The president has the power to veto, or block, legislation that Congress wants to pass into law. For Congress to override a veto, both the Senate and the House must have two-thirds support for the new legislation.

The Constitution also gave the president another responsibility. However, this duty is less clear. The president is asked to “take care that the laws be faithfully executed.”Ever since the Constitution was written in 1787, Americans have debated what these words really mean. Because these words are up for interpretation, the president can try to expand his or her power based on this provision in the Constitution. For example, he or she can issue executive orders that bypass Congress based on the orders’ intention to “take care that the laws be faithfully executed.”

Of course, the United States has continued to change and grow since 1787, when the Founders crafted the Constitution. For example, in George Washington’s day, being commander in chief of the armed forces meant being in charge of 718 soldiers and a few cannons. However, starting with World War II, the commander in chief suddenly had access to powerful nuclear weapons which could easily destroy an entire city. In addition, a president in Washington’s day was not able to easily visit other countries to let his or her opinions be known. Today, Europe or Asia can be reached by air within a few hours. If Washington had wanted to visit a country like England, he would have had to spend a long time onboard a ship to get there. It could take 6 to 14 weeks just to cross the Atlantic by ship.

At first, the president’s powers remained fairly limited. Most presidents in the nineteenth century did not try to test the role of the president to increase power. Besides, whenever a president tried to push the boundaries of power, it was met with great political resistance.

For example, in the 1830s, President Andrew Jackson made great use of his veto power and wanted to use the U.S. Army in disagreements with particular states. By the time his term ended, however, the Senate had censured Jackson and refused to receive any of his messages. In the 1840s, President James K. Polk led the U.S. into a war against Mexico without first receiving a formal, congressional declaration. He was strongly denounced by Senator John C. Calhoun. According to the Constitution, it is Congress, not the president, who has the power to declare war. In the 1860s, during the Civil War, Abraham Lincoln suspended habeas corpus,or the right of a person charged with a crime to appear in court. By the time of his assassination, Lincoln’s policy met with strong opposition from people within his own Republican Party.

In the twentieth century, presidential power began to increase. Presidents from both the Democratic and Republican parties have played roles in expanding this power. From 1901 to 1909, Republican Theodore Roosevelt used his office to address issues important to him, such as personal morality, the exploitation of workers, and environmental conservation. In 1917, Democrat Woodrow Wilson led the United States into World War I. “The world must be made safe for democracy. Its peace must be planted upon the tested foundations of political liberty,” he insisted. “We have no selfish ends to serve. We desire no conquest, no dominion.”

The growth of technology, including electronic mass media, also contributed to the growth of presidential power. Democrat Franklin D. Roosevelt was the first president to use radio broadcasts to communicate with U.S. citizens. These radio addresses were key in helping to raise the morale of the nation during the Great Depression of the 1930s. Then, in the 1980s, Republican Ronald Reagan made effective use of television, which led to him being nicknamed the Great Communicator. Through his television addresses, Reagan gained support for policies, such as his opposition to the Soviet Union, a country which he called the “evil empire.” More recently, in his speech at his second inauguration in 2005, Republican George W. Bush continued the pro-democracy policies of Woodrow Wilson. “All who live in tyranny and hopelessness can know: The United States will not ignore your oppression, or excuse your oppressors,” Bush promised. “When you stand for your liberty, we will stand with you.”

THE MODERN PRESIDENCY AND POWER

So how powerful is a modern-day president really? “People definitely imagine the president has more authority than he or she actually does,” said Bernadette Meyler, a constitutional scholar at Stanford Law School. Although modern presidents seem to be more powerful when they act without congressional approval, such as when entering into a war, they often have a difficult time collaborating with Congress. Because of gridlock, or Congress’s lack of movement or cooperation on certain issues, a president’s power can be reduced as the government becomes stuck.

Historically, presidents exercised power by working in cooperation with Congress. However, it has been difficult for most modern presidents to find this cooperation. “One of the main ways in which presidents traditionally exercised power was proposing a platform that would be implemented through legislation and executive action, and forging coalitions to push legislation through,” Meyler explained. “That’s become so challenging that this very traditional way of exercising power has become closed off in many respects.” Some of what looks like the growth of presidential power is actually presidential attempts to try to overcome congressional gridlock.

“To the extent that we see more executive action outside of the legislative process, often that’s a way of circumventing this gridlock,” Meyler explained. “I couldn’t say whether the president is more powerful than he used to be—certainly there are arguments on both sides—but I think the nature of presidential power has shifted to circumvent some of these blockages in the legislative process.”

Although it is hard to predict whether the president’s power will continue to grow in the twenty-first century, it seems likely that his or her power will change as the world changes. However, it is almost certain that whatever the Constitution meant when it directed the president to “take care that the laws be faithfully executed” will continue to be debated by Americans in years to come.