On September 24, Germans voted in a national election. Angela Merkel had been Germany’s chancellor since 2005, when she became the first woman to head the German government. Merkel had already served three terms. Would she serve a fourth term?

Before she could claim the chancellorship a fourth time, Merkel’s political party, the Christian Democratic Union (CDU), needed a majority of the popular vote. Only then would there be enough CDU members in the Bundestag to re-elect her. The CDU received 32.5 percent of the vote, giving it a majority. Angela Merkel now knew that she would begin her fourth term.

When Angela Merkel was born, Germany consisted of two countries: West Germany and East Germany. She was born Angela Dorothea Kasner in 1954, in Hamburg, West Germany. Her father was a Lutheran pastor, while her mother taught English and Latin. Soon after her birth, Merkel’s father was assigned to a parish in Quitzow, East Germany. This was a major change for the young family. While West Germany had a democratic government, East Germany was under strict communist rule.

After graduating from high school in 1973, Merkel went on to study physics. At college, she married a fellow student named Ulrich Merkel in 1977. The couple divorced in 1982, but she would keep his last name. After graduation in 1978, she taught at the Central Institute of Physical Chemistry at the Academy of Sciences. Merkel was eventually awarded a doctorate for her thesis on quantum chemistry in 1986. 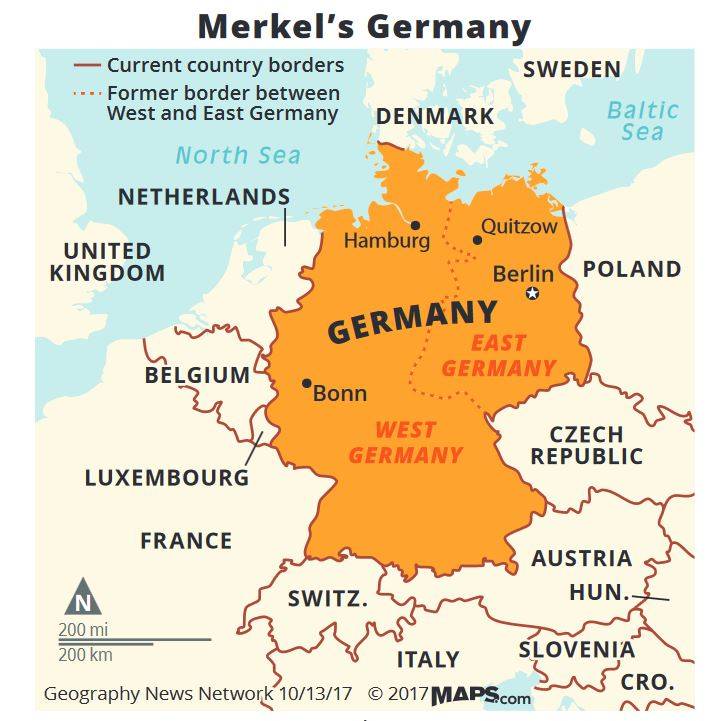 Germany reunited into one country in 1990. The next year, German Chancellor Helmut Kohl appointed Merkel minister for women and youth. People were suspicious that a political newcomer from East Germany would receive such an important position. Some started calling the young politician Kohl’s Mädchen, or “Kohl’s girl.” Merkel proved to Germans that she was her own person, though. It was revealed in 1999 that Kohl had accepted illegal campaign contributions. In response to this scandal, Merkel publicly called for Kohl’s resignation. Taking a stand against her former mentor made Merkel popular with the German public. In April 2000, Merkel was elected head of the CDU.

In the general elections in 2005, a coalition formed by two parties, the CDU and the Christian Social Union (CSU), won a majority vote. That year, Merkel first took office as chancellor. She was not only the first woman, but the first East German, and at age 51, the youngest person, to have ever held the office. She easily won a second term as chancellor in 2009.

During Merkel’s second term, Europe entered a financial crisis. The European debt, or Eurozone crisis, came about when Greece, Portugal, Ireland, Spain, and Cypress could no longer pay the debts they owed. The German government found itself in a difficult situation. Unlike the countries who could not pay their debts, Germany had kept its own debts under control. However, if it did nothing to help these other countries, the German economy would also be affected by these failing economies.

Merkel became a key figure in addressing the Eurozone crisis. She advocated a program of austerity to save the failing economies. Those economies, she thought, could be saved only through strict budget cuts and close supervision. “The issue is not austerity,” she insisted. “The issue is to get back to growth.” Her advocacy of austerity made Merkel and Germany unpopular in those countries most affected by the crisis. In Greece and Spain, some protestors went so far as to compare Merkel to Germany’s World War II leader, Adolph Hitler. In response, Merkel said that the austerity measures were necessary. “We have demonstrations not just abroad but also in Germany,” she said. “As a government, as politicians, we have to accept that. I want these countries to recover quickly.”

While there were protests abroad, Merkel’s economic leadership kept her popular with Germans. German unemployment remained low and the economy stayed healthy. Merkel said the BBC is “widely seen as a safe pair of hands in tough times.” In December of 2013, she became Germany’s chancellor for a third time. Merkel’s economic position now began to soften. She said unemployment could be addressed if European workers were allowed to travel freely throughout Europe in search of jobs.

Germany’s economic success had an unexpected result. Hundreds of thousands of refugees fled to Europe hoping to escape conflicts in countries like Syria and Afghanistan. In 2015 alone, more than one million of those migrants came to Germany. Merkel’s stance regarding the influx of migrants was, “We will manage it.” Most Germans supported her position. However, others opposed this opendoor policy. The Alternative for Germany (AfD) party expressed the frustration of those critics. Its popularity grew. In regional elections in 2016, the AfD defeated Merkel’s CDU in the northern German state of Mecklenburg Western Pomerania. Two weeks later, the CDU was ousted from the local governing coalition in Germany’s capital, Berlin. Protests against Muslim refugees were staged in the German cities of Leipzig and Dresden. There was a rise in German nationalism. Nationalists said that refugees took jobs away from Germans.

Merkel remained popular, leading to her fourth term as chancellor. However, she realized that nationalism needed to be addressed. Because of the growing strength of the AfD, Merkel said she would speak to the needs of voters who left her CDU party to join the AfD. This week, Merkel agreed to limit the number of asylum seekers to enter Germany to 200,000 per year.

Throughout her career, supporters say, Merkel has been a pragmatic leader. When faced with conflicting views, she has made an effort to balance her own ideas against those of her opponents. For example, after the Fukushima nuclear accident in Japan in 2011, Merkel instituted measures to phase out Germany’s nuclear power program. However, just two years before, she had passed a law prolonging the life of Germany’s power plants. While supporters see this position change as pragmatic, critics say that Merkel is too willing to change her mind if her opponents’ ideas happen to become more popular.

Others say the opposite. Instead of being pragmatic, critics say, Merkel can be too strict, as she was during the Eurozone crisis. Critics point out the International Monetary Fund, a group that also advocates austerity measures, has said Merkel’s measures were too extreme, and could cause more damage to already damaged economies.

Whatever critics say, for now, Merkel continues to have strong approval from German citizens at the beginning of her fourth term.

Determining Cause and Effect: Which of Angela Merkel’s actions led to protests in Greece and Spain?

Analyzing Primary Sources: In the text, the BBC compares Angela Merkel to a “safe pair of hands.” What does this mean? How could it apply to Merkel’s leadership?

Defining: What does the word pragmatic mean? Why might some people think that Angela Merkel is a pragmatic leader? Do you agree?

Comparing and Contrasting: In what ways are the American and German processes of electing the head of government the same? How are they differ-ent?