The traditional family model in America before World War II consisted of men working outside of the home earning money, with women staying at home, caring for children and the household. While some women held wage earning jobs, they were limited in the sorts of jobs they could choose. If they worked, it was typical for women to be secretaries, teachers, or nurses. While those jobs were skilled and important, it was very unusual for women to work as doctors, scientists, CEOs, or in other occupations considered more appropriate for men. By 1975, 53 percent of children had a stay at home parent. In 2010, only 29 percent of children had a parent at home. In today’s economy, the majority of family households are supported by the income earned by two people. Because they are now more accepted in the workplace, women have a wider range of opportunities should they decide to pursue a career.

In fact, women make up 57 percent of the labor force, which means there are now more women than men in the American workplace. Women now hold responsible positions in medicine, business, and education. At the same time, more men are working in traditional female jobs like nursing and early childhood education. While today’s economy offers women and men more equal opportunities for employment, the two sexes do not have the same opportunities to earn money. There is still a significant wage gap between genders—around 20 percent. This means that, on average, women earn around 80¢ to men’s $1.00. Simply put, when they both have the same job, it is likely that a man earns more.

There are no laws that limit how far a woman is allowed to rise within her profession or how much she earns. However, there seems to be an invisible barrier, something that blocks women from achieving and earning as much as men. People use the term glass ceiling to refer to that barrier. Even though this barrier may be unseen, its effects are statistically real.

There are many explanations for this income inequality between the sexes. Some cultural analysts point out that many of the occupations traditionally held by women simply pay less. Others argue that while it is true that men now play a larger role in caring for children than they did in the past, women are still more likely than men to take time off from work when families have children. Still others insist that women who have had children are passed over for major positions because employers think their obligations as mothers will make them less effective in the workplace. It is hard to find a single reason that everyone agrees upon. 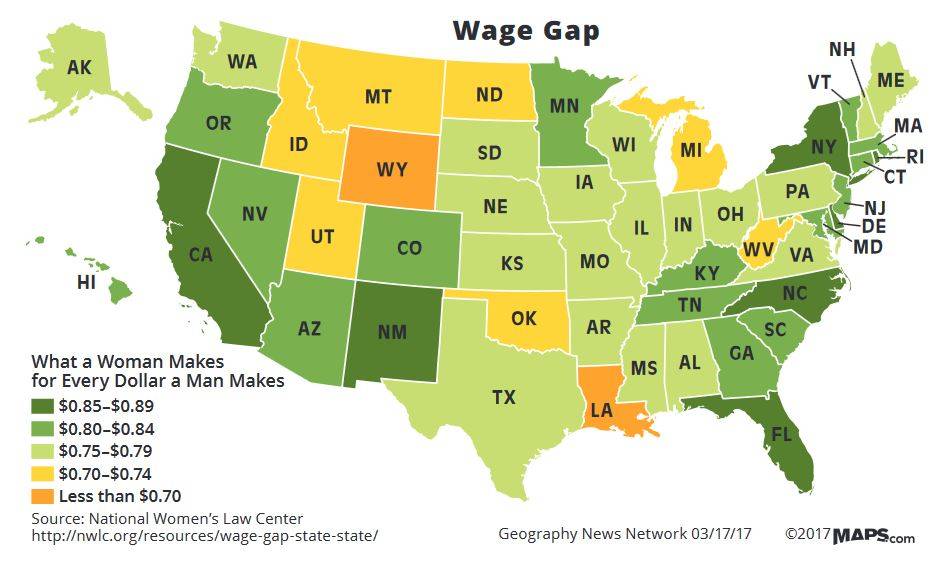 t certainly is not that women are new to the workforce. For thousands of years, a common job held by women throughout the world was as a hawker, or a street vendor. In spite of their economic contributions, women usually did not have the same rights as men. For example, in ancient Rome, women were not allowed to participate in political assemblies or hold any important political positions. This state of affairs continued throughout the Middle Ages and into the Renaissance.

Women’s role in the workplace started changing with the Industrial Revolution. Starting in the late 1700s, machines played a larger role in the creation of products. Americans were jealous of the economic gains being enjoyed by manufacturers in Great Britain because of technological innovations. However, the young country still wanted to preserve its agrarian roots. Women offered a solution to this problem. Men would continue to farm the soil, while women, along with children, the aged, and infirm, would tend the machines. All of these workers would be willing to receive lower wages. George Washington wrote in 1789, “I conceive much might be done in that way by women, children, and others, without taking a necessary hand from tilling the earth.” Writing in 1791, Alexander Hamilton, the first Secretary of the Treasury in the U.S., said that farmers would benefit from “a new source of profit and support, from the increased industry of his wife and daughters, invited and stimulated by the demands of the neighboring manufactories.”

Women remained in this secondary role until World War II. When men left their jobs to go fight in the war, women suddenly had the opportunity to take jobs that were traditionally held by men. Between 1940 and 1945, six million new women workers entered the workplace. The percentage of women in the workforce rose from 27 percent to 37 percent. By 1945, about one out of four married women worked outside of the home. The aviation industry saw the greatest increase in women workers. Before the war, women consisted of only about one percent of the U.S. aircraft industry. In 1943, that number increased to 65 percent, or about 310,000 women. In that same year, a poster designed to encourage production for the war effort at Westinghouse Electric Company combined with a popular song to bring the fictional character of “Rosie the Riveter” into public popularity. The poster helped draw even more women to industrial jobs. With her red, polkadot bandana and her flexed arm muscle, Rosie was and remains an iconic American image. However, even though women were crucial to the success of America’s war effort, women still rarely earned more than 50 percent of men’s wages.

Once men returned from the war, women were largely forced to give up their jobs to the returning veterans. However, women continued to enter the workface in larger numbers than they had before the war. Even though their work in industry was key to America’s success in World War II, they were now mostly relegated to positions judged more suitable for women, such as teaching, nursing, office work, and retail sales.

Women workers won an important legal victory in 1964 with the passage of the Civil Rights Act. This act outlawed discrimination based on race, color, religion, sex, or national origin. This was followed in 1965 by the establishment of the Equal Employment Opportunity Commission, a federal agency that enforces rules against workplace discrimination. Another important piece of legislation came in 1978 with the Pregnancy Discrimination Act, which banned discrimination against pregnant women in the workplace.

In recent years, the recession that started with the financial crisis of 2007-2008 resulted in more job losses among men than women. In many families, the man was unemployed while the woman continued to work and support the family. While in 1967 about 12 percent of mothers were their family’s prime wage earner, by 2010, that number had increased to 41 percent. The numbers show that across all income levels, the percentage of working wives earning more than their husbands has gotten higher and higher. Even among working mothers with children of any age, the numbers show that wives are earning more than their husbands.

Even though there were 50,000,000 more women working in 2014 than in 1960, and despite important gains achieved by anti-discrimination legislation, the numbers reflect a trend that has remained true throughout most of the history of the world: women earn less than men. Also, while laws have been in effect for over 50 years outlawing discrimination by sex, in 2014 the top four jobs held by women are still among those that would have been considered proper for a woman to work in before the passing of the Civil Rights Act in 1964: clerical office workers, elementary and middle school teachers, nurses, and medical aides.

On March 8th, people observed International Women’s Day, a holiday adopted by the United Nations in 1975. In honor of the day, a business called State Street Global Advisors placed a statue of a girl on Wall Street in New York City’s financial district. The girl stands defiant in front of a more famous statue, that of a charging bull that has stood in front of the New York Stock Exchange since 1989. The company said that they placed the sculpture by artist Kristen Visbal to draw attention to the role of women in American business. In 2017, one in four companies on the Russell 3000 Index, a list that rates the success of businesses, have no women on their boards. Why, when women make up more than half of the work force, is there still this lack of female representation at the highest levels of business?

The answer many would give is the glass ceiling. We can’t see it. We’re not precisely sure what it is, or who or what created it. But data shows that no matter what advances they’ve made, or what sort of laws the government has enacted, women usually earn less than men. People will continue to debate the concept of a glass ceiling to understand why, until perhaps it no longer exists.

Explaining: What is the glass ceiling, and why is it important to understand?

Identifying: What data provided in the article supports the idea of the glass ceiling?

Speculating: Why do you think there is a glass ceiling? Will it ever disappear? Why or why not?