Pi is a constant number. It is never-ending, although it is simply shortened to 3.14, thus the date of Pi Day. It has been calculated to over ten trillion digits beyond its decimal point. Pi is simple to use in calculations as 3.14, but calculating the decimal places in pi is infinite and is with-out any continuous repetition. This makes calculating pi an interesting challenge. People even compete to memorize pi by as many digits beyond the decimal as they possibly can recall.

In fact, the Guinness World Re-cords recognizes the memorization of the most decimal places in pi. The Guinness website names Rajveer Meena of India as the current record holder with 70,000 decimal places. Who first discovered pi? While we cannot know for certain, the first re-corded attempts to determine the ratios within a circle’s dimensions come from nearly 4,000 years ago and the ancient Babylonians. A Babylonian tablet dated from the period 1900-1680 b.c. shows the value of pi as 3.125, which is pretty close. A papyrus, or ancient paper, from around 1650 b.c. in ancient Egypt shows the Egyptians calculated the area of a circle using an approximate value of 3.1605. Pi is even mentioned in the Old Testament of the Christian Bible.

The first formula to try to calculate pi was from Archimedes in ancient Greece, from about 287-212 b.c. Archimedes was a brilliant ancient mathematician. Meanwhile in ancient China, mathematicians worked on determining the area of a circle using a similar approach to the problem as Archimedes had used. There are several records of the Chinese approximating pi. In ancient India, Hindu mathematicians too worked on how to determine the area of a circle. Arab cultures were well-versed in mathematics. They also used approximations for the ratio, but their figure was still off. 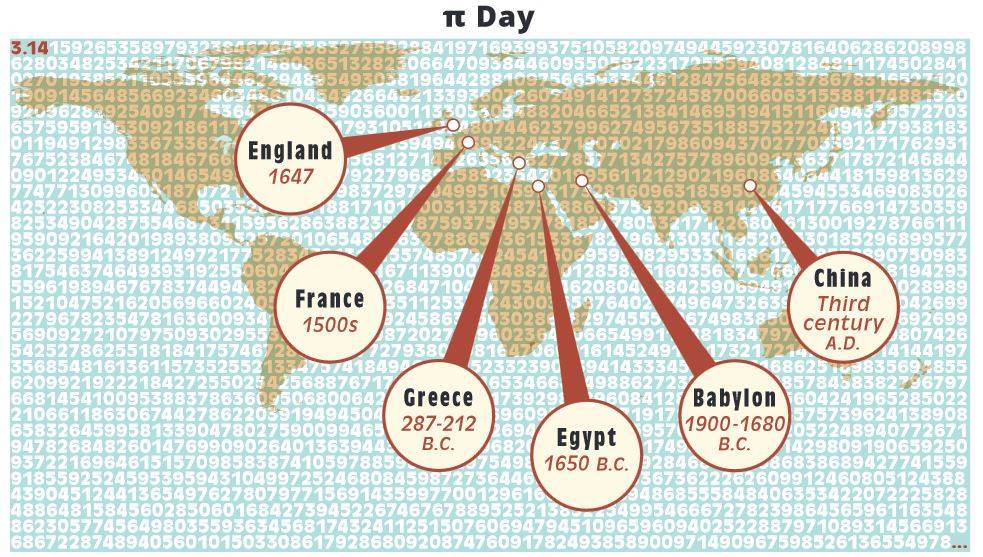 Finally, by the sixteenth century French amateur mathematician Francoise Viete reused the method Archimedes had tried and deter-mined pi was 3.1415926537. Most importantly, he recognized that pi is an infinite number. However, there was no symbol to signify the ratio of a circle’s circumference to its diameter. That changed in the seventeenth century. Englishman William Oughtred published a work in 1647 that first used the Greek letter pi that we still use today.

In 1961, a computer was used to find 100,000 digits in pi. By 1973, a computer had determined the value of pi to one million digits. In recent years, several mathematicians have been in a race to calculate pi to more and more digits. With no end in sight, people remain intrigued by this constant and infinite number.