THE MOTHER OF THE CIVIL RIGHTS MOVEMENT: ROSA PARKS

“People always say that I didn’t give up my seat because I was tired, but that isn’t true. I was not tired physically… No, the only tired I was, was tired of giving in.”

On December 1, 1955, a 42-year old African American woman finished her job as a seamstress in a department store in Montgomery, Alabama. She waited to board the Cleveland Avenue city bus that, although it had taken her home every day, wouldn’t that day. Instead, she would be arrested, providing the spark the Civil Rights Movement needed to rally and demand change.

Rosa was seated in the row just behind the seats reserved for whites. When a white man entered the full bus, the driver insisted that all four African Americans sitting just behind the white section give up their seats so that the man could sit there, creating a new white row. The other three moved, but Rosa made a choice: she refused to give up her seat.

Rosa had felt the injustice and humiliation of racism all her life. After her parents separated, she and her mother had lived with her grandparents, who were former slaves, on their farm. As a child, she had walked to a run-down schoolhouse while white children rode on the bus to the new school. “I'd see the bus pass every day,” she said. “But to me, that was a way of life; we had no choice but to accept what was the custom. The bus was among the first ways I realized there was a black world and a white world.”

Rosa and her husband, Raymond Parks, were active members of the National Association for the Advancement of Colored People (NAACP). Her refusal was unplanned but felt right. “When I made that decision,” she said later, “I knew that I had the strength of my ancestors with me.”

She was arrested, but wasn’t afraid. She was convicted of violating the laws of segregation, known as “Jim Crow laws,” which affected nearly every aspect of life in public places. African Americans couldn’t use the same drinking fountains or restrooms as whites and were separated in restaurants, workplaces, libraries, schools, trains, and buses. Rosa wasn’t the first to refuse to give up her seat, but she was a well-liked, dignified woman known in the community. She paid a $14 fine but appealed her conviction, challenging the legality of segregation. 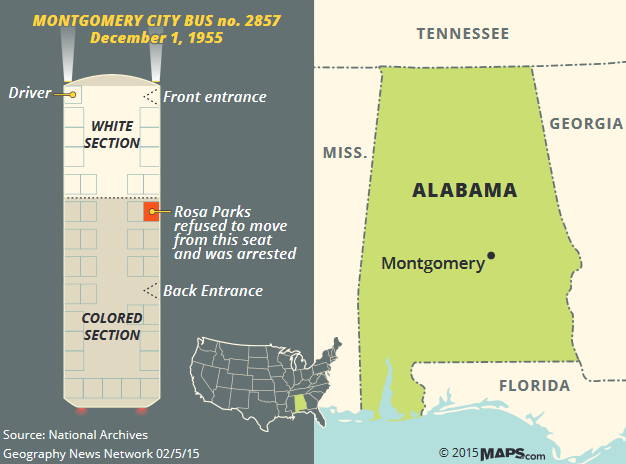 On the day of her conviction, the local civil rights movement began boycotting (avoided using) the Montgomery bus system. African Americans walked, took taxis, and carpooled. As African Americans made up 75% of the bus riders, the boycott crippled the bus system, and buses sat empty along roads. Leading the boycott was a young preacher named Dr. Martin Luther King, Jr., who became a legendary activist. The 381-day Montgomery Bus Boycott ended when the Supreme Court ruled that bus segregation was unconstitutional. It was one of the biggest and most effective movements against racial segregation in history; it came at a cost.

Rosa and Raymond had to be brave as they lost their jobs, were threatened, and harassed. Eventually, they moved to Detroit, Michigan, where Rosa worked for Congressman John Conyers, Jr. until she retired. To help Detroit’s youth, she co-founded the Rosa and Raymond Parks Institute for Self-Development. Throughout her life she worked for civil rights. She wrote books, including her autobiography, “Rosa Parks: My Story,” and received numerous medals, including the Congressional Gold Medal, the highest honor a civilian can earn. When she died at age 92 on October 24, 2005, she became the first woman in the nation’s history to lie in state (letting 50,000 pay their respects at her casket) at the U.S. Capitol, where her statue now stands.