Each year many Americans celebrate a day made especially for romance—Valentine’s Day. This special day is also celebrated in Mexico, Canada, France, the United Kingdom, and Australia. Valentine’s Day has its roots in ancient Roman tradition as well as Christian tradition. The day received its name in honor of Saint Valentine, however, the exact origin of the day is not altogether clear. Historians also are not clear on which saint the day is named for as there were at least three different saints named Valentine (or Valentinus), and all of these men were martyrs. This means they suffered some form of persecution as a result of their beliefs or actions. One story points to a Catholic priest name Valentine who lived during the third century in Rome. In this story, the emperor Claudius II outlawed marriage because he believed single men made better soldiers than those men with wives and families. Valentine became a martyr because he continued to perform marriages—in secret—despite the emperor’s wishes. When Valentine was discovered, Claudius II ordered him put to death, forever making him a martyr to those in love and wishing marriage. A different story about Valentine says that he helped Christians escape from Roman prisons. Prisoners were often beaten or tortured, causing Valentine to want to help them. However, he in turn was imprisoned. In one tale, Valentine sent a letter to a young girl, thereby sending the first “valentine.” He fell in love with the girl--she had visited him while he was in prison—and he closed this letter by signing, “From your Valentine.” Although we do not know for certain which saint the celebration is named for, the common thread throughout the stories of Saint Valentine is of a sympathetic and romantic martyr. As you probably know, Valentine’s Day is celebrated on February 14th. There are different ideas about why that date was chosen. Some speculate that it is around either the birth or the death of St. Valentine. Others suggest it is because the date coincides with an early pagan festival in Rome. Lupercalia was an ancient Roman festival that took place on the 15th of February. Lupercalia was a fertility festival dedicated to Faunus, the Roman god of agriculture, and to the founders of Rome, Romulus and Remus. At the start of the festival, members of an order of Roman priests called Luperci gathered at the cave believed to have been where Romulus and Remus were cared for as infants by a she-wolf. “Wolf” in Latin is lupus from which the festival got its name. The festival involved the Luperci matchmaking between available women and the city’s bachelors. These matches often led to marriage. Lupercalia was eventually outlawed at the end of the fifth century for not being Christian. It is possible that Valentine’s Day began around Lupercalia as a way to encourage pagans to turn to Christianity. The oldest valentine that still exists today was a poem written in a.d. 1415 by the Duke of Orleans to his wife when he was imprisoned in the Tower of London. Today, this valentine is held in the British Library in their manuscript collection. Valentine’s Day has been celebrated in one form or another since at least the Middle Ages, or the Medieval Period of European history. It became popularized in Great Britain around the seventeenth century. By the middle of the eighteenth century, it was common for even friends to exchange handwritten valentine notes with one another as symbols of affection. 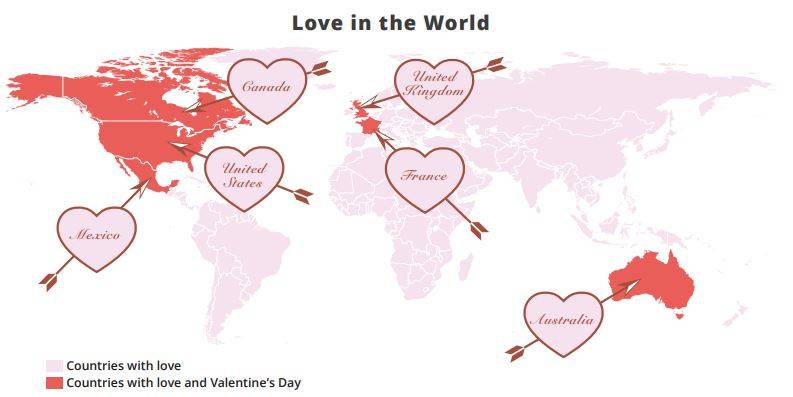 Handwritten notes were replaced by printed cards in the 1900s. By this time, printing technology had advanced enough to make premade cards possible. These printed cards helped people express emotions they may have been uncomfortable or unwilling to otherwise share. Also, mass-produced valentines made it cheaper and easier for people to send greetings so they could send them to larger groups of people. Esther A. Howland, known as the “Mother of the Valentine” is credited as the first seller of mass-produced valentines in the United States. Her elaborate cards included real lace, ribbons, and colorful images. The Greeting Card Association estimates that today 1 billion Valentine’s Day cards are sent each year, with women making up approximately 85 percent of all card buyers. Brought to you by Geography News Network. February 13, 2015. #134.