Human settlement and expansion into most of Earth’s biomes has had a huge effect on wildlife. Because humans can make tools, they can live in many different environments. However, this can affect the other species that live there. Expanding settlements encroach on the habitats of wildlife. This threatens the survival of many animal and plant species. With smaller habitats, species have less shelter. Worse, the balance of the food chain is disturbed, leaving many animals in danger of dying off because of a lack of food. To avoid this kind of problem, governments and private organizations throughout the globe work to ensure wildlife is protected, and never faces extinction. In the United States, Congress has passed several important conservation laws. The Marine Mammal Protection Act (MMPA) of 1972 focused on animals such as whales, dolphins, porpoises, and manatees. The next year, the Endangered Species Act (ESA) was passed. It targets both domestic and international species that are threatened. The U.S. Fish and Wildlife Service, along with other federal agencies, is tasked with carrying out the guidelines set forth in these legislative protections. They also maintain the list of species that are considered threatened or endangered. This list includes vertebrates (e.g. mammals, birds, and fish), invertebrates (e.g. insects, clams, and corals), non-flowering plants (e.g. conifers, ferns, and lichens), and flowering plants. In addition to wildlife, the list includes critical habitats. Also through the ESA, the U.S. government provides states with funding and incentives to protect wildlife, further encouraging conservation of endangered species. Enacted more recently, the Wild Bird Conservation Act (WBCA) of 1992 focuses on exotic bird species that may be harmed through international trade. This act regulates importation of certain bird species, including for scientific purposes, zoological display and breeding, and as personal pets. It also encourages conservation and breeding programs of birds in their countries of origin. Successful wildlife conservation requires an international effort. Numerous countries follow an international trade agreement based on protecting nature, called CITES (Convention on International Trade in Endangered Species of Wild Fauna and Flora). Begun in the 1960s, the goal of CITES is to safeguard the survival of wild animal and plant species that are subject to international trade. International trade in wildlife is valued in the billions of dollars each year. Their uses are broad, including in food products, as exotic leather goods, for wooden musical instruments, and in medicines. Regulating international trade requires the cooperation of countries throughout the globe. In their efforts, CITES watches more than 35,000 different species of animals and plants. 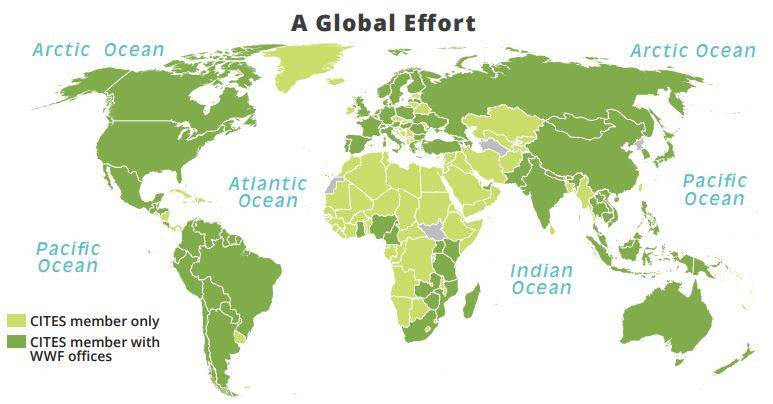 The World Wildlife Fund (WWF) is a nonprofit organization focused on wildlife conservation in the Unites States and abroad. The WWF has been at work in several areas of conservation for over 50 years. They focus on issues related to environments, such as the world’s forests and oceans, as well as on freshwater, wildlife, food, and climate. There are 100 member countries of the WWF with nearly 5 million individual members—with 1.2 of them in the United States! Although the WWF works to conserve numerous species, their efforts largely address the populations of gorillas, elephants, tigers, whales, giant pandas, sea turtles, polar bears, and rhinoceros. Many of these animals are displayed in zoos, in part to help with breeding, but also to educate the public about these magnificent animals. Doing so encourages new generations to continue wildlife conservation for years to come. Brought to you by Geography News Network. July 15, 2016. #195.